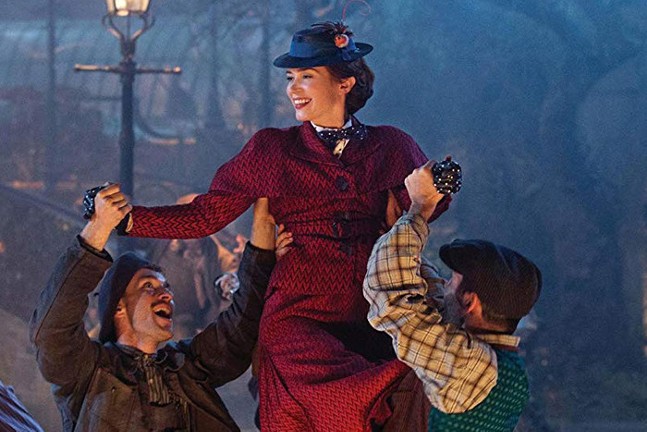 Jay Maidment/Disney
Emily Blunt as Mary Poppins
The original Mary Poppins is a beloved classic. It stars the iconic Julie Andrews singing memorable tunes like "Supercalifragilisticexpialidocious" and "Chim Chim Cher-ee." I have never seen it, but it sounds lovely. (Don't yell at me, I'm sure there are plenty of classics you haven't seen!)

I have however, seen the Disney sequel Mary Poppins Returns, a sometimes fun but often pointless update, because it seemed like an easier holiday movie to watch with my boyfriend's mom than Roma.

Michael Banks (Ben Whishaw), of the original's Banks Family, is now grown, living in the same childhood home with a family of his own. The house is in disarray as Michael and his three young children are still recovering from the death of his wife/their mother. They have help from his sister Jane (Emily Mortimer), but no one can stop the bank from foreclosing on their house, giving the family a few days to pay back loans or get out. Things start to look a little brighter when Mary Poppins (Emily Blunt) floats down from the sky with her umbrella, and immediately starts mending the Banks family through whimsical song and dance.

Mary Poppins takes the kids on surreal adventures, like diving into the scenery on a decorative bowl, or convincing a bunch of lamplighters to scale Big Ben. With help from Mary Poppins, along with sprightly lamplighter Jack (Lin-Manuel Miranda), the kids solve the crisis and defeat evil banker Wilkins (Colin Firth), who was trying to thwart the family all along.

Mary Poppins Returns has a few visually mesmerizing scenes, including a sequence where the characters enter a hand-drawn, 2D animated world. It's a beautiful tribute to classic animated Disney movies, and a reminder of how bizarre some modern animation has become. In another, the kids climb into a bathtub, only to be transported to an oceanic wonderland with synchronized dolphins and treasure chests filled with gold.

But more often than not, the movie lacks a sustained spark. Many of the scenes are forgettable or drag on too long, including an unnecessary number where Meryl Streep appears as yet another kooky lady in wig with a funny voice. (Why is this her chosen path now?) Another features a hoard of lamplighters singing and dancing about lamplighting as a metaphor.

Blunt is a fine pick for Mary Poppins — she has the poise and charisma any magical nanny needs — though her speech and performance are oddly robotic at times. Miranda, who gets second billing in this movie, is almost completely unessential to story. He's a lamplighter who knows of Mary Poppins, therefore he just follows her and the kids around on all their adventures, speaking with a glaringly unnatural cockney accent. But do look out for a cameo of 93-year-old Dick Van Dyke, more limber than any of us could ever hope to be.

It would be nice if Disney took the tepid audience reaction to the film as some sort of indication that rebooting the same stories is a tired venture, and maybe it's worth exploring new stories. There have been plenty of movies about British kids, old-timey England, and quirky nannies. Please, just make a new movie.

In the Heights at Pittsburgh CLO

Beauty and the Beast

The Girl on the Train 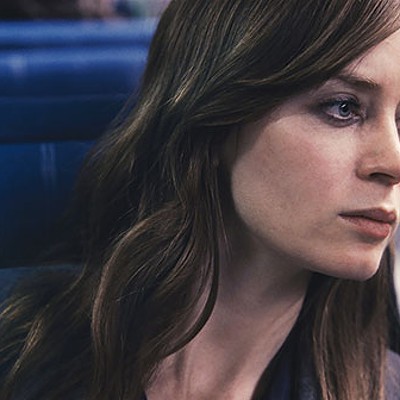