Marty's Market is set to open in the Strip District

Planned: a sidewalk café, a "food theater" and direct connections to local farms 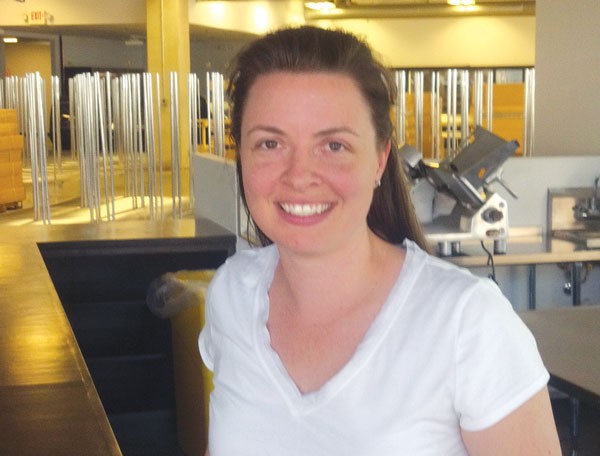 Regina Koetters, the owner of Marty's Market, the new grocery store opening in the Strip District this month, operated a cash register Sunday for the first time in her life.

She's never stocked shelves, worked a deli counter or butchered meat. She's never cooked in a restaurant or served food as a waitress.

"I don't have a background in food," says the 34-year-old lieutenant commander in the U.S. Navy, who, while no longer on active duty, still serves as a drilling reservist and runs a unit in Jacksonville, Fla.

That hasn't, however, deterred her from opening a grocery to be supplied directly by local farmers — in the same spot where the Right by Nature grocery store folded a little more than a year ago.

Weeks from opening, Marty's Market looks nothing like the former grocery, with open garage doors replacing the length of two walls. A coffee bar with sidewalk service and a cafe that will serve breakfast are also new features, as is the "food theater" at the center of the market, wired for TV production.

"What I'm doing here at Marty's is building a stage for people who do have culinary talent, who do know a lot about agriculture and letting them perform," she says.

Koetters, raised in Kentucky, says she chose Pittsburgh as her home in 2008 to find a project to "make the world better, one block at a time." With a master's degree from the University of Michigan in business and real-estate development (her undergrad is in designing war ships), she says she was motivated to start a grocery as a way to connect people and strengthen the region's food system.

A business model that focuses on farms of two to six acres, including investing in them upfront with capital to be repaid in product, is part of what differentiates the market from its predecessor.

She has also turned to Pittsburgh's food industry leaders for talent: Her butcher was hired on the recommendation of Cure's Justin Severino.

But her ignorance of the industry, she says, may be her greatest advantage. "If I knew how difficult this was going to be, I would have never started," she says.