Martin Esquivel-Hernandez has been a rock for Pittsburgh’s Latino community but with deportation looming, he’s the one in need of support | News | Pittsburgh | Pittsburgh City Paper

Martin Esquivel-Hernandez has been a rock for Pittsburgh’s Latino community but with deportation looming, he’s the one in need of support

“He is our brother, our compañero, and we just won’t accept this.” 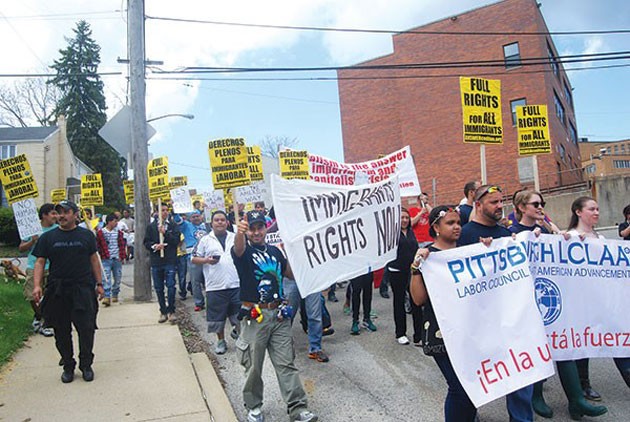 On May 1, Martin Esquivel-Hernandez and his family marched in an immigrants’ rights rally from Beechview to Brookline. He and his young daughters held a sign that read: “Not one more deportation.”

The next morning at 6 a.m., U.S. Immigration and Customs Enforcement officers took Esquivel-Hernandez from his Pittsburgh home. Now, the next deportation could be his.

Since his arrest, he has been indicted by a federal grand jury and has been taken on a 665-mile journey that has stretched from his home to the York County prison in Southeastern Pennsylvania, back to U.S. District Court in Pittsburgh, then to the Cambria County Prison near Altoona, and eventually to a private prison in Youngstown, Ohio. He has spent more than seven weeks away from his family and it’s unclear when, and if, he’ll ever make it home.

Esquivel-Hernandez is an undocumented immigrant from Mexico, who had previously made four unsuccessful attempts to cross the border; he has been in the United States since 2012. According to state magistrate court documents, he has no criminal record apart from minor traffic violations. He is being charged federally with felony illegal re-entry, and if convicted, he’ll be sent back to York — the state’s unofficial ICE detainee hub and deportation center. There, he could have a deportation hearing within a month of arrival and be sent back to Mexico, a country that is his native land, but one that lacks the things most important to him: his wife, his three children, his mother and his home.

But Esquivel-Hernandez is fighting back against his potential deportation. Instead of pleading guilty to the federal charges and throwing himself on the mercy of the immigration court, as many defendants do, he’s going to trial for the charges. His family and friends have started a public campaign to draw attention to his case to hopefully keep him in the country and in the community where he works, volunteers and is an activist for immigrants’ rights.

The odds are stacked against him. Criminal cases for undocumented immigrants — which have been steadily on the rise nationally in recent years — are usually rushed and near impossible to defend. The process is made even more difficult because communication with outside help is often complicated by the detention process.

Esquivel-Hernandez volunteered with the Latino Family Center in Hazelwood; participated in the needs assessment for Latinos in the city; and advocated for better services for immigrants in Pittsburgh schools.  He’s important to the community, advocates say. And Monica Ruiz, of the Latino community-resource group Casa San José, says this is the first time in Pittsburgh that a large community effort has sprung up to prevent an undocumented Latino immigrant from being deported.

“The community is gathering around him,” says Guillermo Perez, of the Pittsburgh chapter of Labor Council for Latin American Advancement. “We are not going to take this lying down. He is our brother, our compañero, and we just won’t accept this.”

When Esquivel-Hernandez was charged by the federal government, U.S. Attorney David Hickton issued a press release calling him an “illegal alien,” a term found offensive by many groups, including the Library of Congress. Such treatment isn’t sitting well with Esquivel-Hernandez’s supporters.

“It is not the first time something like this has happened. When you read what was written by the U.S. Attorney, that does not reflect who Martin is,” says Ruiz. “We have tons of letters from people in the community. We need to let the people know who Martin is.” 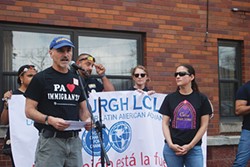 Esquivel-Hernandez is from Jalalpa, a slum in Mexico City. In 2011, his wife, Alma, and their two daughters fled gang violence, crossed the border illegally and ended up in San Jose, Calif. After a brief time there, she moved with her daughters to Pittsburgh, where Esquivel-Hernandez’s mother, who is also undocumented, has been living since 2005.

In November 2011, Esquivel-Hernandez attempted to cross the U.S. border to join his family, but he was caught and sent back to Mexico. He tried to cross three more times but was captured and sent back. Immigrants caught at or near the border are prosecuted by special courts, where they can voluntarily return to Mexico without facing criminal prosecution.

On his fifth attempt, sometime after May 2012, Esquivel-Hernandez entered undetected and traveled safely to Pittsburgh.

“He gives and does everything just for his family,” says Alma through a translator. “As a husband, he has been a huge support. And for his children, he is superhero.”

Alma says she has been with Esquivel-Hernandez for 12 years, and they finally got married last year. She says he works in construction, and on many nights, he comes home from work very tired. But when his children remind him there is a school function, he quickly gets ready and heads out with his kids. She says Esquivel-Hernandez doesn’t drink or party with his friends and is always with the children. During the May 1 rally, two plush toys were attached to his belt, in case his youngest son (a U.S. citizen) became bored.

And Esquivel-Hernandez’s family extends beyond his wife and children. It also includes members of Pittsburgh’s Latino community. In fact, helping out the community is how Perez met Esquivel-Hernandez 18 months ago, when he approached Perez about a wage-theft case involving some friends on a construction job.

“Martin is a guy who sees injustice and feels compelled to do something about it, especially for his community,” says Perez. “He is not just a good father, good husband and good son — he is a genuine asset to this community.”

Alma says that Esquivel-Hernandez “is demoralized” in detention and is experiencing back pain. There was an eight-day period after his arrest when Alma didn’t know where he was being held and Esquivel-Hernandez could not communicate with his family. During his arraignment earlier this month in Pittsburgh, which City Paper attended, he was mostly silent, his face red as he wiped his eyes with tissues. Alma says he is worried about who will provide for his family while he is detained. Alma, who is undocumented, also works, but Perez says she now has to find additional work to support her three children.

But they are not ready to concede this fight. Alma says her husband is a person who doesn’t stand for injustice. “He thinks that if it’s within his power to help other people, he will do that,” she says.

Perez spoke with Esquivel-Hernandez on June 18, and he says Esquivel-Hernandez is determined to stay positive for now, with the hope that his supporters can provide some help. Ruiz, of Casa San José, says 30 notarized letters have been written by pastors, professors at the University of Pittsburgh, public-school teachers and Esquivel-Hernandez’s employer in support of him.