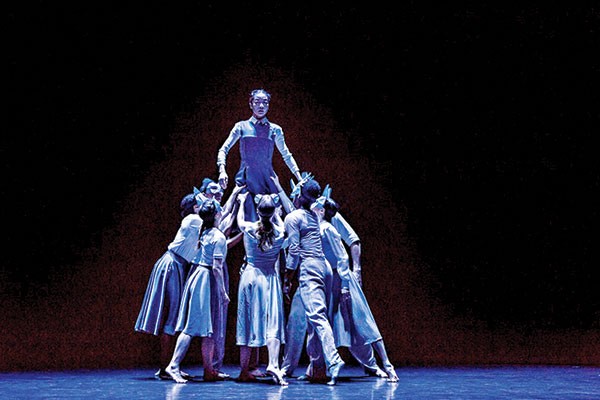 Graham’s namesake company returns to the city of her birth, and the Byham Theater, on Oct. 1 for a Pittsburgh Dance Council season-opener showcasing Graham classics along with works by contemporary choreographers in celebration of the company’s 90th anniversary.

The 90-minute program begins with “Dark Meadow Suite,” an arrangement of highlights from Graham’s 1946 work “Dark Meadow.” Considered one of Graham’s most complex pieces, it was inspired by references in Greek mythology to the dark meadow of Ate. Wrote Graham, “Dark Meadow is a re-enactment of the Mysteries which attend the eternal adventure of seeking.”

Next, Swedish choreographer Pontus Lidberg’s “Woodland” (2016) weaves a tale of emotional yearning. Set to music by Irving Fine, the work, in the contemporary dance style, features an ensemble of four couples and an isolated female soloist.

Lidberg’s work is part of recent shift in the company’s programming to include more non-Graham dance works. “The new works we do are in conversation with the Graham classics, but not in the Graham tradition,” says Martha Graham Dance Company artistic director Janet Eilber, by phone from New York. Eilber says she asks choreographers creating new works to take inspiration from the Graham legacy, even if they vary stylistically.

Created in 2007 to commemorate the anniversary of Sept. 11, Lamentation Variations is a series of dances, each four minutes or less, set on the company and inspired by Graham’s iconic 1930 solo, Lamentation, for which she was encased in a tube of fabric. Of the project’s dozen variations to date, Eilber says she chose for Pittsburgh her go-to combination of Taiwanese choreographer Bulareyaung Pagarlava’s quartet to music by Mahler; choreographer Richard Move’s glacially paced postmodern solo; and choreographer Larry Keigwin’s full-company variation that references the brevity of life. Preceding the variations will be archival film of Graham dancing Lamentation.