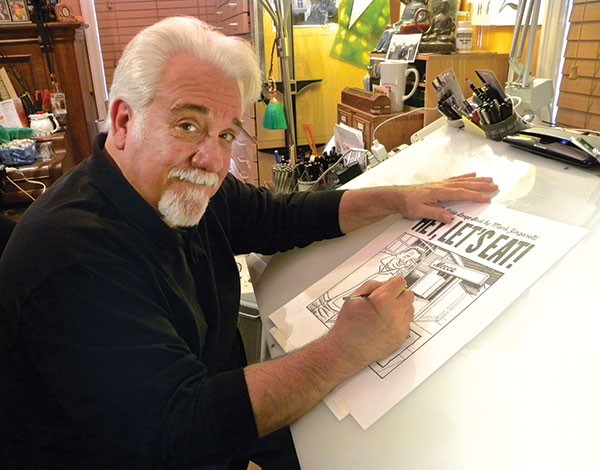 Photo by Danielle Fox
Mark Zingarelli in his studio

Before Joyce Brabner and Mark Zingarelli could finish their book-length nonfiction comic on the 1980s AIDS crisis, they had to take things out back.

Halfway through completing Second Avenue Caper: When Goodfellas, Divas, and Dealers Plotted Against the Plague, Zingarelli, a professional illustrator/comic artist and writer, lost his momentum and his muse. But it was imperative that he and Brabner wrap up their five-year collaboration: The book's main character, Ray, a friend of Brabner's, was wrestling a grave illness.

With time dwindling and Zingarelli hung up on perfection, comics author Brabner drove from Cleveland to his doorstep in Irwin, Pa.

From outdoors, after dusk, Brabner peered into Zingarelli's window. He was eating dinner with his family. She knocked. He opened his front door. Brabner says she "grabbed him by the shirt collar," said, "‘Hi,' ya know" to the family, then took him "out back and just let him have it."

"Do you want to do this book or don't you?" she asked. "Whether it's artist's block or whatever, ya know, this is going to be a good book."

That talking-to — Zingarelli's wife called it a "come-to-Jesus meeting" — worked. After a day or two of "soul-searching," he says, his illustrations flowed into the 145-page true story of a queer artist community in Lower East Side Manhattan during the 1980s AIDS epidemic. Second Avenue Caper (Hill and Wang) hit shelves in November.

In a time before red ribbons, the medical community was slow to react to AIDS. It was initially labeled GRID (gay-related immune deficiency) and considered "gay cancer." Gays were stigmatized, and the U.S. government remained mum as AIDS swept San Francisco and New York. Today, AIDS remains the sixth leading cause of death worldwide. 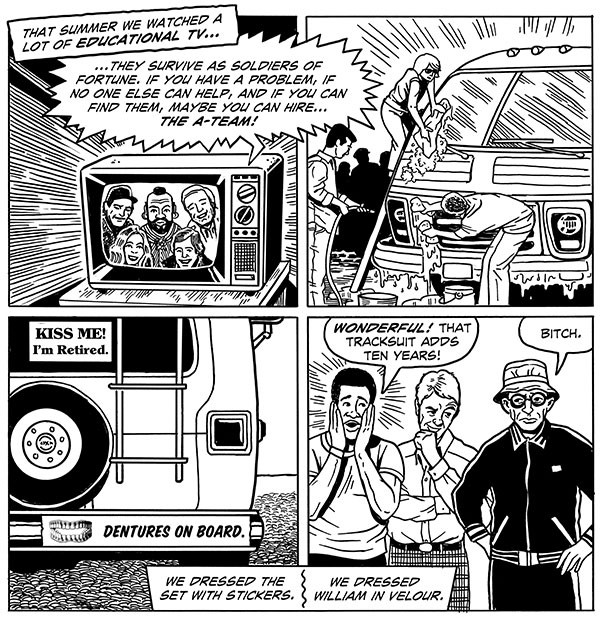 A sequence from Second Avenue Caper, with art by Mark Zingarelli

With the Ebola outbreak, and affordable health care still an issue, their book remains timely, say Brabner and Zingarelli.

Second Avenue Caper introduces Ray, a nurse and playwright living in New York City, retelling the story to Brabner years after the fact.

Ray (many characters' names have been changed) begins selling pot to fund a joke "Columbian arts interest grant" for him and his partner, Ben.

After Ray cares for "patient # 24," a young man suffering from a mysterious, debilitating disease hitting urban gay men, he and Ben channel their entrepreneurship toward a new task: aiding their sick friends. The book follows Ray, Ben and their community through an illegal, but heroic, narrative full of heartbreak and hope.

A graceless, crooked doctor kicks off their marijuana-funded enterprise, leading to a deal with the mafia. In exchange for "errands," the group received an RV with hidden compartments. The mobbed-out ride facilitates trips across the Mexican border to procure Ribavirin, the experimental AIDS drug.

"It's also important to see that gay and lesbian community was not just sitting still and taking it," Zingarelli says. "They knew something had to be done, and they had to make a fuss. It was more than just distributing condoms, that sort of thing."

Despite its looming specter of death, Zingarelli says Second Avenue Caper isn't a sad book. "There's a lot of people pulling together to help others who are less fortunate," he says. "It was that kind of unheralded, unpublicized stuff that makes the story worth telling."

Pekar died in 2010, leaving Brabner to put Second Avenue Caper on hold while she carried out his unfinished projects. She chose Zingarelli, she says, because of his journalistic perspective, clear illustration and good heart.

"This wasn't going to be an easy thing for me, firstly because of the subject matter, but also because this is the first stand-alone book I've done since my husband's death," says Brabner.

Outside of graphic novels, Zingarelli built his career through commercial illustrations for publications like The New Yorker, Sports Illustrated and Newsweek. Other projects include "Eatin' Out With Eddie," a series of comic-strip restaurant reviews he began in 1988, and which he plans to publish as a comprehensive book.

Zingarelli, who returned to Pittsburgh in the '90s, says his blue-collar upbringing in Western Pennsylvania colored his sense of community, which translates into his storytelling.

So far, Second Avenue Caper has received high praise. Los Angeles Times journalist David Ulin wrote that it "evokes the guerrilla status of these early activists, the street-level aspect of their work," adding that Zingarelli renders "the human face of AIDS."

Brabner professes no surprise at the acclaim.

"I got a reputation for being hard but never harder than on anybody else than I am on myself," she says. "I knew he could work with me. He just didn't know it yet. That's all."