"This is my family tree," a caption reads, but the "tree" is actually a gallows. 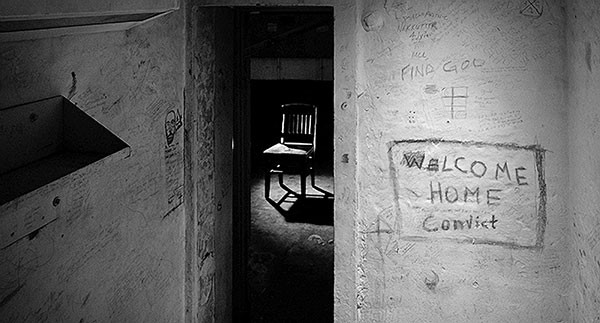 What is justice, exactly? Isn't justice just systematized revenge? A man kills your spouse, so he disappears to a concrete box for the rest of his life. Someone steals your TV, so he endures some months of cafeteria fights. A guy gets caught with a baggie of marijuana — confinement, terror, despair. They languish, while we, the free people, feel safe and vindicated by their distant suffering.

But justice leaves scars. Photographer Mark Perrott has long turned his lens on abandoned prisons, and E Block is his latest exhibit (and accompanying book), focusing on Western Penitentiary. The prison lurks just down the Ohio River from PNC Park. Perrott shot inside Western Penitentiary before it closed in 2005. The fortress-like structure re-opened in 2007.

As explained in his artist's statement, Perrott was drawn to prisoners' prolific graffiti. Throughout E Block, inmates sketched pictures and scrawled messages, some thoughtful, others profane, all expressions of personal hell. None of these drawings are Michelangelos, the images and penmanship roughly those you'd find in a men's-room stall. But the iconography howls with rage and anguish. Instead of promising good times, the inmates document their unspeakable inner lives.

Not surprisingly, the drawings have a lot to do with sex — the kind of pornographic sex that groups of cloistered men obsess over. Crude anatomical drawings aside, one portrait depicts only a hand: "My girlfriend for the next ten years," reads the caption. The sexual starvation is palpable, and the images disturbing, like blueprints for their next assault.

Other scribbles reveal a sadder humanity. "This is my family tree," a caption reads, but the "tree" is actually a gallows, and a frowning figure dangles from its noose. A drawing of a squad car states, without comment, "Erie Police." Some inmates forego images altogether; a paragraph of text starts this way: "Nothing is quite as rediculous [sic] as a man who walks the streets as some sort of tough guy — then comes to jail playing like he is religious."

Perrott has illustrated this world before, in his series Hope Abandoned, about Eastern State Penitentiary. But the subject never gets old: We are the most incarcerated nation in the world, and there are always more stories to tell. Justice doesn't end with a gavel strike. Too often, it gets life.