"I want to explore the ideas of venue — push the limits of what a venue is." 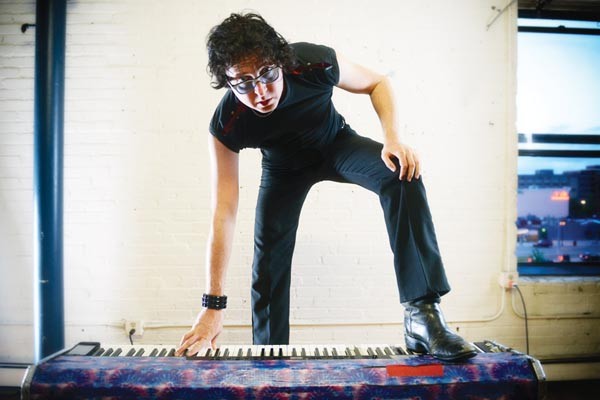 Photo courtesy of Wilson Webb
Van man: Mark Mallman with one of his more traditional instruments

Gearing up for his Marathon Four: Roadrogue project, Mark Mallman is faced with the task of explaining the tour to inquisitive journalists. It involves playing music without stopping, for seven days, in a van, while on a road trip from New York City to Los Angeles. It sounds like the whole thing is one big question mark.

"It's kind of a big question mark to us, too!" Mallman says with a laugh. "It's never been done before!"

No one's done anything quite like it. People have, of course, gotten in a van and toured cross-country. And Mallman, a songwriter and film-score composer — who has a background, if you hadn't guessed it, in performance art — has done Marathon projects too, playing music for stretches of hours or days straight, though always based out of static venues around his Minneapolis hometown.

"We actually webcast the first one back in 1999," Mallman says. "We only could stream the audio, and it didn't work very well."

That was a 26-hour project (hence the name Marathon). In subsequent projects, he increased the time by 26 hours each time; the most recent was 78 hours.

"By 60 hours I was starting to lose my mind; by 70 hours, I was totally — I watched the tapes, and I don't remember any of it, and I was on fire as a performer.

"I think the first one," he continues, "was about — if you take a performer, put them onstage and strip them completely of their conscious mind, what is that like? What are they going to do? And I found out that I was definitely the same guy. Kind of like when Jack Kerouac goes up into the forest ranger station in Dharma Bums, and he thinks he's going to have this hallucination, but he's just bored."

Then came the next step. Mallman began to bandy about the idea of doing a 100-hour marathon. Then he started to change his mind. ("I felt like 100 hours was just self-abuse," he admits.)

"I thought, ‘I want to explore the ideas of venue — push the limits of what a venue is.'"

The third Marathon got a sizeable Internet audience — over 25,000 viewers in all, he says — over its 78 hours, so he realized that playing in a place where others can come watch isn't that necessary. So he's taking it on the road, but rather than different audiences coming out for each performance, he's encouraging one online audience to follow along and see America with him.

Rather than stay awake the whole time — the trip is over 150 hours, after all — Mallman will be using biogenerative music devices on his road trip, so as to keep making music (in a sense) even while he's asleep. Picking up on brain waves and his heart rate with hacked medical hardware and the Ableton Live sequencing program, he'll maintain the music (or at least the ambient sound generation) throughout.

He'll be meeting with local musicians along the way, as well; a few Pittsburgh notables are lined up now — but don't expect to go see them play live. Instead, if you want to see the Pittsburgh portion of the trip, you'll want to tune in in the latter part of Sat., Sept. 15, when Pittsburgh is the first stop after that morning's New York departure.

As for the big question — Why? — that doesn't really concern Mark Mallman.

"It's weird and fun, and I don't really look at it as ‘Why?' Especially in the Midwest, people don't really question why, they just get excited about what's going to happen next."