Marjorie Prime illustrates the pitfalls of artificial life after death 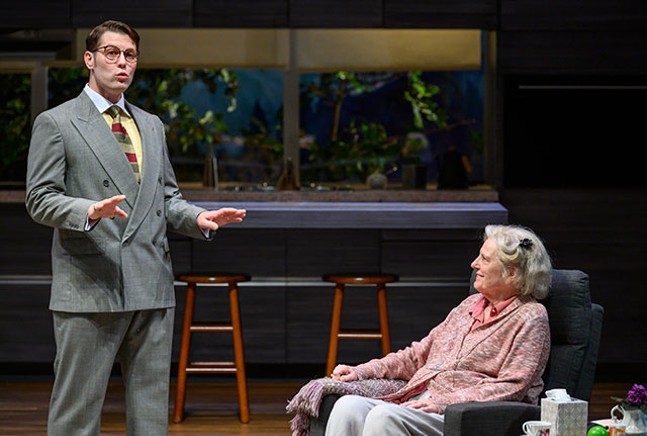 At first glance, sci-fi and theater might seem like a bad match. One is built for intimacy and vulnerability, the other for elaborate production and flamboyant artifice (there are exceptions, of course). But the past two decades have seen a shift in popular science fiction, from using technological advances to tell otherworldly stories, to mining our own relationships with technology to tell human stories. It's in these kinds of stories that theater and sci-fi don't just work well together, they actually uproot and rewrite traditions in both formats with surprising and poignant results. Jordan Harrison's Pulitzer Prize-nominated play Marjorie Prime — which closes out Pittsburgh Public Theater's 2018-2019 season — is one of the best examples of this innovative storytelling.

Directed by PPT artistic director Marya Sea Kaminski, Marjorie Prime opens in a chic living room in the year 2062. The furniture isn't particularly futuristic looking, but the space is minimally dressed, cold, and a little too clean. It turns out the mega-rich of 2019 and the middle class of 2062 have similar tastes in interior decorating. There are good looking lamps, spotless counters, and windows that look out onto plants and trees. It's difficult to explain, but the sight of healthy green leaves foregrounded by the antiseptic kitchen is incredibly creepy. The tension between organic life and unnatural sterility is everywhere in Marjorie Prime.

The plot follows a family dealing with the imminent death of its matriarch, Marjorie (Jill Tanner). She's staying with her daughter Tess (Daina Michelle Griffith) and son-in-law Jon (Nathan Hinton). Marjorie has a non-human companion too, an artificially intelligent hologram (or "prime") of her late husband Walter (Ben Blazer). There's a stiffness to Walter that can only be described as 1950s suburban husband-meets-robot, which is what he is. Tess is half-bemused but mostly weirded out by AI Walter, particularly the potential sexual implications of their relationship since her mother chose such a young version of Walt to bring to life. But this is more or less palliative care, and there are more important things to worry about.

Setting the story in 2062 has a pointedly eerie effect as the characters don't seem much more comfortable hanging with artificial versions of dead loved ones compared to now. A constant for human life is yearning to keep the dead alive and inevitably being disappointed when we find ways to do so. That's not exactly untrodden territory, but Marjorie Prime illuminates it with odd, profound, funny, disturbing ideas that feel new. The nakedness of the performers’ faces and voices on stage renders the artifice of the primes all the more disturbing, making it all the more difficult to trust that what you're seeing is real.