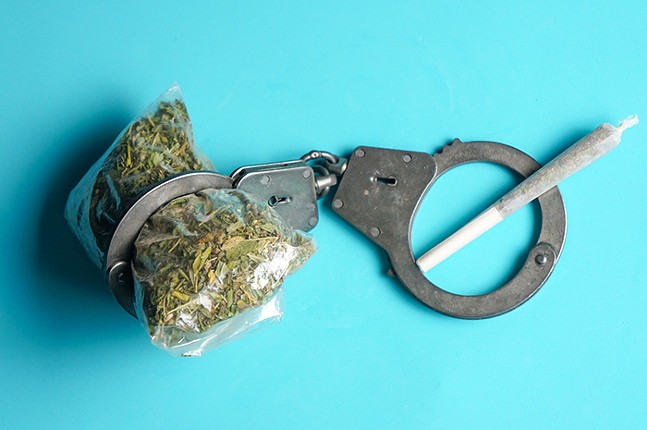 Several states across the U.S. have legalized adult-use cannabis in 2020, but many of their laws were not yet operational during that year. Pennsylvania's medical-cannabis law became operation in 2018, but the commonwealth has not legalized recreational cannabis.

“As more states move toward the sensible policy of legalizing and regulating cannabis, we are seeing a decline in the arrest of non-violent marijuana consumers nationwide,” said NORML Executive Director Erik Altieri in a press release. “The fight for legalization is a fight for justice. While these numbers represent a historic decline in arrests, even one person being put into handcuffs for the simple possession of marijuana is too many.”

This nationwide decrease was in sharp contrast to Pennsylvania, which only saw a 7% decrease in marijuana-related arrests in 2020, even though small amounts of marijuana have been decriminalized in many of Pennsylvania’s largest cities, including Pittsburgh.

According to Pennsylvania State Police data compiled by NORML, there were 20,200 adults arrested for marijuana-related violations in the commonwealth in 2020. That’s compared to 21,789 in 2019, according to the Philadelphia Inquirer.

Under 35 Pa. Consolidated Statutes Annotated section 780-113 subsections (a)(16) and (a)(31). Subsection (a)(31), Pennsylvanians can be charged with misdemeanors for large or small amounts of marijuana possession, which means a person possessing or distributing, but not selling, 30 grams of marijuana or 8 grams of hashish can be charged and could face up to 30 days in prison or a fine of up to $500.

For Pittsburgh, however, city police officers can issue citations for small amounts of possession instead of misdemeanors. However, some officers still charge people for misdemeanors under subsection (a)(31).

“Marijuana should not be used as an excuse for law enforcement to interact with otherwise law-abiding members of the public, especially during a global pandemic,” NORML State Policies Manager Carly Wolf said in a press release. “The ongoing prohibition of marijuana in Pennsylvania encroaches upon civil liberties and disproportionately impacts communities of color. It’s time for lawmakers to take action so that marijuana consumers are no longer treated as second-class citizens.”

Marijuana related arrests also have a disproportionate toll on Black Pennsylvanians. Although Black people make up 12% of the Pennsylvania population, 32% of marijuana arrests in the state in 2020 were of Black people, according to NORML. Black residents are about 3.5 times more likely to be arrested for marijuana in Pennsylvania than white counterparts.

On Sept. 28, state Reps. Jake Wheatley (D-Hill District) and Dan Frankel (D-Squirrel Hill) introduced a bill proposing the legalization of adult use of recreational marijuana in Pennsylvania. If approved, the bill would make it legal for anyone 21 and older to purchase and consume recreational marijuana in Pennsylvania and provide for direct participation in the cannabis industry by individuals in communities that the criminalization of marijuana has disproportionately impacted.

“Failed cannabis policies of the past have resulted in the worst of all possible worlds: insufficient protection of the public health, aggressive enforcement that disproportionately harms communities of color, and zero revenue for this commonwealth,” Frankel said in a statement. “With this legislation, Pennsylvania can begin to repair the historical harms and reap the benefits of a fact-based approach to regulating the cultivation, commerce and use of cannabis for adults over 21 years old.”