Photo: Ericka Cuenca/Olivia LeSuer
Not My Revolution
Having spent decades acting, directing, designing, and writing for the stage in New York, Los Angeles, and London, international theater artist Elizabeth Elias Huffman is thrilled to make her hometown debut this week in the newest iteration of her imaginative solo show, Not My Revolution, at Carnegie’s Off the WALL productions.

Not My Revolution, which Huffman has been developing since 2016, is “a dreamlike play” about two women from two different historical moments dealing with the impact of forced displacement and civil war. The play weaves together a narrative of Marie Antoinette’s imprisonment during the French Revolution with the experiences of a once-wealthy Syrian art dealer, known only as “the Displaced Woman,” who struggles to survive catastrophic loss living as a refugee in Istanbul in 2011. These two women, both played by Huffman, who is Syrian American, grapple with their powerlessness in the face of war and uncertainty.

She hopes her play will help audiences see that “when it comes to revolution and war, it's a leveler,” Huffman tells Pittsburgh City Paper. “You could be the richest person in the land and still lose everything. So it could happen to you.”

The play was born from a desire to elevate the experiences of Syrian refugees. Huffman says that at the time she began envisioning the project that would become Not My Revolution, “I was worried about my family in Syria and upset about the war that was just ripping the country apart, and I wanted to do something that would bring awareness to that situation, but I didn't know what.”

Around that time, she says, she remembered a play on her shelf called French Gray by Josef Bush, a one-act play about the end of Antoinette’s life.

“I'd been holding on to that play for a really long time thinking I might perform it one day, but the play had problems for me, it didn't quite work,” she says. 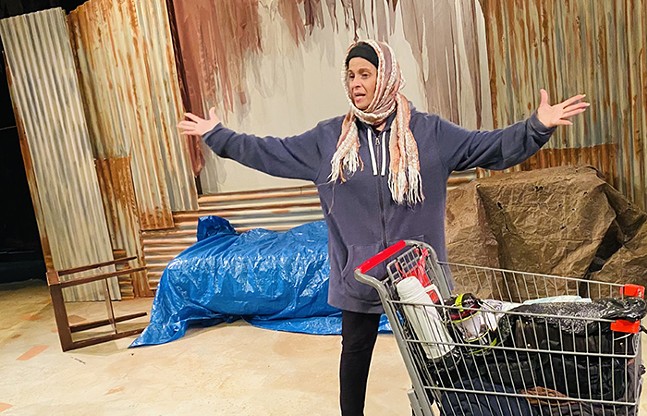 Photo: Ericka Cuenca/Olivia LeSuer
Not My Revolution
When she read French Gray to her friend and frequent collaborator Luanne Moldovan, the founder and artistic director of Cygnet Productions in Portland, Ore., they both saw French Gray’s potential as a starting material for a new play involving the Syrian civil war that could speak to the consequences of forced displacement across time and space. Moldovan bought into the vision and signed on as the play’s director.

“She's somebody who really knows how to develop a script,” Huffman says of Moldovan. “It's a project that we both are so connected with and we love so much and are really excited to share it.”

The play “sort of wrote itself in a way,” she says, and, although it’s a solo show, Not My Revolution has benefited from the contributions of many talented friends and collaborators over the years as well as her research on the French Revolution and time spent interviewing Syrian refugees about their experiences.

She looks forward to the opportunity to offer talk-backs after the show’s two Sunday matinees, which she says will include invited guests, local people with insight into the Syrian civil war, refugee resettlement, and women’s roles in the history of revolution.

“The one thing I've learned about this play in every place I've played is the audience wants to talk about it,” she says.

Huffman is no stranger to solo performances. Throughout her career, she’s performed in four solo shows, playing a total of 54 characters, according to her website. Solo shows “really require an enormous amount of focus, stamina, and energy,” she says, noting that performing a play by yourself is “like running a decathlon. You have to be in prime shape. You have to watch what you eat. You have to get to bed early. You have to keep yourself pure and clear-minded because 90 minutes is a long time to hold the stage by yourself and then to navigate through very difficult text and complex characters.”

Born and raised in Monongahela, Pa., Huffman recently decided to return home and get involved in the local arts community.

“There's a real amazing energy in the arts in Pittsburgh,” she says, “I found that out in my visits coming back here, and I thought, ‘I want to be a part of this arts community.’” She hopes to eventually open a professional theater company in the Mon Valley.

In the meantime, “Off the WALL productions were my first friends here,” she says, letting her use their performance space one day a week throughout the pandemic to continue to develop Not My Revolution. The play’s development has been largely funded by Huffman’s patron Ronni Lacroute, she says.

“It takes more than a village to make a play like this, and it takes years, but I think I’ve got it,” she says. “This is the most beautiful production of this play I’ve ever had … it’s the production I’ve dreamt of from the get-go.”
Not My Revolution. Fri., June 17-Sat., July 2. Off the WALL Productions. 25 West Main St., Carnegie. $5-40. insideoffthewall.com