Marianne & Leonard: Words of Love is a lopsided documentary about the relationship between Leonard Cohen and Marianne Ihlen | Film | Pittsburgh | Pittsburgh City Paper

Marianne & Leonard: Words of Love is a lopsided documentary about the relationship between Leonard Cohen and Marianne Ihlen 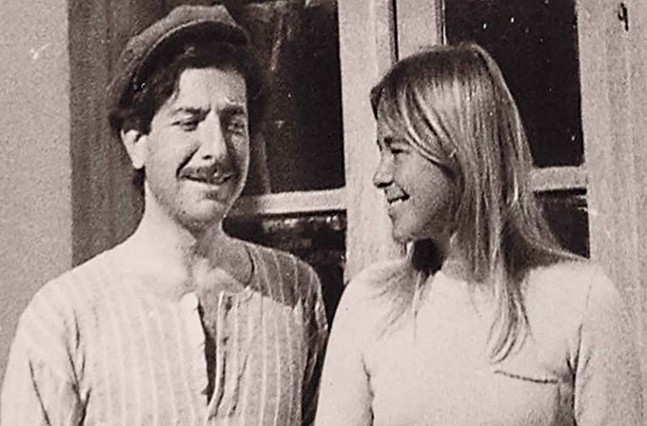 Just before Leonard Cohen’s former girlfriend and muse Marianne Ihlen, subject of “So Long, Marianne,” died in 2016, Cohen sent her a letter. A paraphrased version was widely circulated and reprinted in articles, but the paraphrasing didn’t matter, because the real fascination was with the romantic relationship and friendship between Cohen and Ihlen, which lasted over 50 years.

The new documentary Marianne & Leonard: Words of Love is, as the title indicates, a film that follows the bond between Cohen and Ihlen – or at least that’s its intention. The film is directed by Nick Broomfield, who appears in the film both onscreen and in narration, as he states that he too had a friendship and romantic relationship with Ihlen.

The film opens on the Greek island of Hydra, where Cohen and Ihlen met in the 1960s. The setting is idyllic: a warm, beautiful island with pure blue water and white buildings. There were only a few non-Greeks living there at the time, including a group of artists and free thinkers like Ihlen, who was living there with her young son Axel after leaving her native Norway and separating from her first husband.

It all sounds utopian in the way everything about “free love” in the ’60s does if you shine the right light on it. The freedom! The sunshine! The drugs! The moonlight! Cohen and Ihlen quickly developed a strong relationship; she supported him as he wrote novels and he helped with her son. But it was only ideal on the surface. The kids especially were traumatized by the amount of freedom on the island, as several people describe the dangerous availability of LSD (Ihlen’s son went to an asylum as a young teenager after taking the drug).

With his writing career failing, Cohen pivoted to music at age 33, after never having played or sung before. It was a shock to his and Ihlen’s relationship, as he started touring, living in Canada more, and sleeping with other women. They only saw each other a couple months or weeks out of the year. Cohen sees great success and Ihlen is described mostly as a muse, one who surrounded herself with artists, writers, and musicians, but never found any artistic fulfillment herself. It’s the real curse of the muse; like the Giving Tree, they nurture and encourage and sacrifice all to one person who doesn’t return it as fully.

While the film sets out to follow the decades-long relationship, it’s mostly about Cohen’s life and career. The film does a disservice to Ihlen by pretending it’s equally about her and Cohen. Old friends and bandmates of Cohen’s reminisce about how he wrote certain songs and what drugs he did during different performances. It gives insight into Cohen’s story, but not enough to feel well-rounded. It mentions only briefly and casually, for example, that Cohen lived in a Zen Buddhist monastery for six years. His kids are barely mentioned at all.

Personal documentaries about celebrities’ lives can feel intrusive, but if the subject is interesting or juicy enough, it’s easy to overlook. But Marianne & Leonard feels too much like a bunch of people speculating about what their friends’ diary says. In one inappropriate moment, Broomfield mentions that Ihlen was pregnant by Cohen and he drove her to get an abortion. One longtime friend says, “If anyone should’ve had Leonard’s children, she deserved to have them.”

When someone becomes rich and famous because of their fans, they accept that with success comes an interest in their personal life. But that doesn’t mean it’s worth a full-length documentary, or that we deserve to make art out of their lives.