Margot B. talks about Boardwalk Empire, singing and what Pittsburgh taught her

"It's been a hustle ever since I first moved there, and just because I got Boardwalk doesn't mean that changed, necessarily." 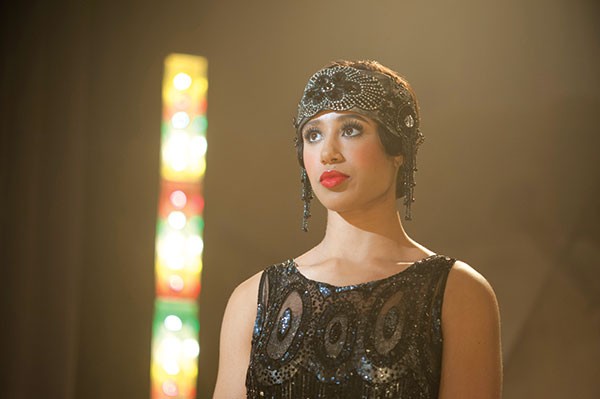 Back in time: Margot Bingham as Daughter Maitland on Boardwalk Empire

Margot Bingham came of age in Pittsburgh as a singer and actress, attending CAPA High School and performing under the name Margot B. Now, at age 25, she's got a recurring role on the HBO series Boardwalk Empire, on which she plays a young Prohibition-era jazz singer. She was back in town last week for a special screening, and CP caught up with her beforehand.

You use two names these days — Margot Bingham and Margot B., the latter being how we got to know you as a singer in Pittsburgh. Do you do that to keep your two personas and careers separate?

You also have two totally different types of music going on, between how you sing for Boardwalk Empire and what you do as Margot B. How do you navigate that?

I think because it is my character on Boardwalk — I didn't know ['20s-style jazz] before Boardwalk came around, music-wise. I was definitely listening to '40s and '50s jazz, always, my whole life. So when I started listening to some of the '20s music, and focusing more on that as the character, I kind of placed that as her voice. So when I stepped out of the character, it was easy for me to drop that mask. It's nice to still be able to have my own music, and it keeps me busy in-between times. And it's nice to do the '20s music because it allows me to play a little with my vocal ability and see what I'm capable of that I didn't even know I could do.

When you're working on your music now, that's still more in the vein of contemporary pop music?

I'm a little more funk-soul than pop, I'd say. I have an eight-piece band, and a whole horn section and everything, and it's definitely progressed since the last time I played in Pittsburgh. I think no matter who you work with, it always influences you a bit.

How long ago did you move from Pittsburgh to New York?

What was it like during those years between the grind in Pittsburgh and getting a break on this TV show? How have things changed over that time?

I might have hit a role of a lifetime, but I still have to keep working after this, because there has to be an "after this." Up until this point I've been auditioning, trying to get roles and job, and singing at venues. And now, being [in New York] for five years, I can know the venue-booking contact and just call them, just walk into places and they know my vibe and I can hop onstage. And I know plenty more musicians now. But it's been a hustle ever since I first moved there, and just because I got Boardwalk doesn't mean that changed, necessarily. I've still got my work cut out for me.

Do you have plans for upcoming recordings — are you able to take advantage of the momentum?

I am trying to take advantage of the momentum. I'm trying to get back into the studio this month, work with some producers and writers who I've had the chance to meet through this opportunity — some people I've looked up to my whole career. I'm really going to take November and December to focus on some stuff for 2014. I hope that while things are going on, I can focus on the next step — when people are looking, I want to be ready.

No Pittsburgh live dates on the horizon?

No — I haven't played Pittsburgh in a couple of years. Unless that changes and people want me back. But definitely, keep up with my website, and see what's coming up song-wise; I'm sure there will be something in the new year.

Is there something specific you learned while coming up in Pittsburgh that you've kept with you?

The director [at CAPA], Mindy Rossi-Stabler, always taught a very strong work ethic, and she had a very strong work ethic. Just because we were given roles didn't mean they were necessarily ours to keep the whole time. If we screwed up, she would be very quick to remove us from it. And by doing that, even though some people would look at that as being harsh, or too much for high school, it really did instill a strong foundation for me to move ahead, and have the strength to hear the "nos" that I have — and I'm sure I'll hear plenty more in the future — and continue to keep working. Just because I've landed a role doesn't mean my work stops here; it's just begun.

Say I'm a 16- or 17-year-old singer in Pittsburgh; what advice would you give me?

Learn everything. One of the biggest mistakes people make is they have one focus: They go to school for one thing, they have one goal. Life is never gonna be like that, it's never gonna be what you think, and it's never gonna be what you want to do, your whole life. One day, God willing, it will be. But I've never been just a singer — I've done writing, I've done producing, I've done engineer work, I've done background singing for people in studios, and getting one-day pay for gigs and voiceovers. I just try to continue to be the best I can as an all-around entertainer. And for anyone, in any field, not just artists — don't focus on one thing. Try to always know everything and take it all in.