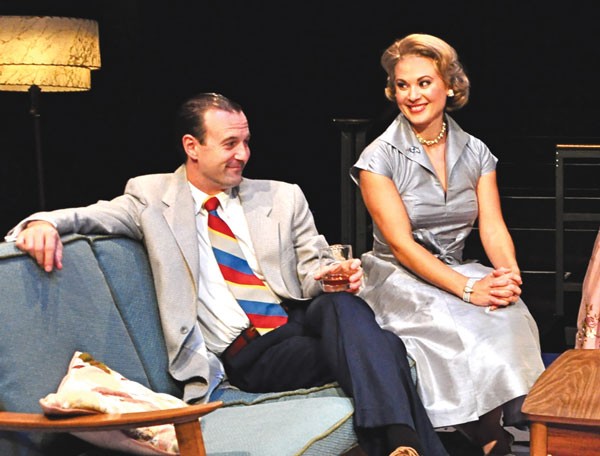 The setting for the new show at City Theatre could be described this way. Time: The Present. Place: America in the '50s.

In his 2011 work Maple and Vine, playwright Jordan Harrison imagines a group of people called the Society for Dynamic Obsolescence. Frightened of or fed up with the modern world, they create a very large gated community in which the citizens — on a 24/7 basis — live, work and think like it's 1955. It's a neat idea: an examination of nostalgia versus reality.

The problem is that Harrison seems unwilling or unable to consider the ramifications of his setup, and the way he sidesteps the questions he's posed is maddening.

Katha and Ryu are a stressed and depressed married couple who, offered refuge in a safer time, accept. Harrison might have contrasted our notion of retro '50s cool with the actuality of America's past. But every time the script begins nibbling around political edges, Harrison retreats into the mawkish personal stories of his characters.

This failing is screamingly obvious on race. The unspoken question is whether there any African Americans in this world and, if so, what non-insane black person would ever willingly go back to Jim Crow? Emmett Till was lynched in 1955. The fact that the SDO is probably all white and moneyed could be a very interesting point, but Harrison skips over it.

He tries to neuter the question by making Ryu of Japanese descent. And while I'm not negating the racism faced by Japanese Americans, to posit that as the "race issue" of 1950s America is disingenuous in the extreme. Sexual and gender politics are handled in a similarly coy fashion. What could be a great discussion about huge American themes continually dissolves into a not-particularly-interesting soap opera about people who, truth to tell, don't really make a whole lot of sense.

Director Kip Fagan leads his cast with some intelligence. Caralyn Kozlowski gets the showiest role as SDO den mother and takes advantage of the opportunity. Greg McFadden has fun playing both oppressor and oppressed; Ross Beschler does well moving from sleazy to sympathetic; and Robin Abramson and Nelson Lee, playing the married couple, manage to find some truth in inconsistently written roles.