His venture at Sixth and East Carson streets, Mantini's Wood-fired, had everything going for it except its address. Recently, Mantini made the leap from the fringe to the heart of the South Side and learned what a difference six blocks can make. In so doing, he created a brand-new arena for his vision of wood-fired fine dining in a magnificent double storefront where Old Europe once served borscht and haluski.

Unlike the old Mantini's, which consisted of an orange-walled dining room beyond an old-fashioned bar, the new Mantini's feels expansive and urbane, like a loft at ground level. The bar floats like an island near the tall plate-glass storefront, which invites natural light into the deep dining room beyond. The seating area is large and unfussy, dominated by exposed brick walls, a hardwood floor and black-painted ceiling. Instead of flame-colored walls, a couple of gas fireplaces warm things up. In the back is an open kitchen, and by open, we mean wide-open: A counter runs around the perimeter, with barstools for those who consider cooking a spectator sport. Count us in.

Mantini took the opportunity also to revise his menu, maintaining most of it, but nipping and tucking in some areas, augmenting in others. In response to local tastes, the lunch menu has added crabcakes and fried-cod sandwiches, both panko-coated for lightness. Dinner, meanwhile, focuses almost exclusively on big -- and pricy -- cuts of meat, including a two-pound ribeye. The kitchen's creativity is focused on the daily specials of fish, pasta and vegetable dishes.

We began with an appetizer of cherry-wood-smoked chicken lettuce wraps. Chicken is notoriously difficult to grill, wanting to dry out long before developing a flavorful char; after three hours on the fire, ours amazingly included both crisp, flavorful edges and moist shreds within, a tribute to Mantini's finesse with flame. The diced vegetables alongside were not spicy, as advertised, but had the character of a simple, soy-based stir-fry, lightened by the juicy lettuce leaves. A second appetizer, beer-steamed shrimp, were big, meaty and garlicky, served with an assertively horseradish-licious cocktail sauce.

Mantini's entrée menu brought out Jason's carnivorous side, or rather, catered to its every whim. He chose both a filet mignon (petite, thank you very much) and a half-rack of ribs. The filet was a tail piece, with the thin tip tucked alongside. We were worried that the meat wouldn't be done consistently, but the crust was heartier and more textured than this refined cut normally enjoys, while the interior remained rosy red and tender. The smoky, savory fruitwood char lent excellent flavor to this can-be-bland cut.

The ribs, alas, failed to live up to Jason's warm memories of those from the previous Mantini's. The meat was, as expected, falling off the bone, but the charred surface that raised these ribs to finer fare was only sporadic. There was also too much sauce for his liking; its sweet and vinegary taste overwhelmed that of the meat.

Angelique opted for the fish special, grilled halibut with papaya coulis and balsamic glaze. The beautifully cooked fish was firm, flaky and tender all at once, and deeply infused with fruitwood flavor. The sweet, plummy notes of the papaya and balsamic vinegar complemented the savory ones imparted by the grill, while a bed of buttered rice provided a pleasantly mild balance.

Side dishes at Mantini's deserve a special mention. Southern-style green beans were well stewed with bacon, while baked beans straddled sweet northern and tomatoey southern traditions. Excellent fries were delivered, unbidden, to our daughter even before the bread basket, a touch that two-time father Mantini uses to keep kids engaged. What made the biggest impressions were cheddar-bacon smashed potatoes, with tender bacon pieces folded into creamy potatoes, and creamed spinach. Rich and velvety, this dish could've been called spinach chowder.

Second chances are rare in the dining world, and Mantini has made the most of his. In relocating his marriage of down-home cooking method and ambitious culinary goals, little has been lost, and quite a few things gained. 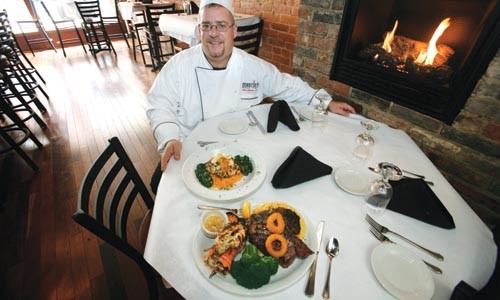 Heather Mull
Matt Mantini, with a pair of wood-fired entrees