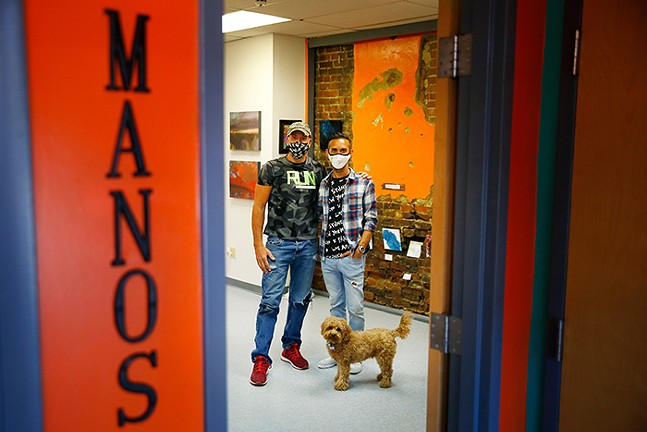 CP Photo: Jared Wickerham
Manos Gallery owners Brian Defelices and Ernesto Camacho Jr.
Growing up, Ernesto Camacho dreamed of owning an art gallery. With the November 2020 opening of the Manos Gallery in Tarentum, Camacho and his partner, Brian DeFelices, have fulfilled that goal, with plans to keep the dream, and the gallery, going.

The gallery, about 22 miles northeast of Pittsburgh, was once the location of the Palace Theater in 1920, before becoming the Manos Theater in 1950. After closing in 1978, the location had a stint as a liquor store and office building. Now, the 3,000-square-foot first floor is an inclusive space that showcases local artists along with Camacho’s work, and hosts events such as painting classes and wine and art nights.

Camacho’s focus on inclusivity is rooted in his first experience submitting his art to a gallery. Although he was initially excited, that gallery turned down his work, likely in part because he was so young, says Camacho. The rejection was discouraging for Camacho, but it helped shape the kind of gallery he wanted to create.

DeFelices bought the three-floor building in March 2020, and he and Camacho spent the spring and summer renovating it. DeFelices is a real estate investor and contractor, and with an ongoing pandemic, it was safer for the two of them to work together than call in outside help, though it often required working long days and nights. Still, they say the fruits of their labor were exciting, such as finding brick from the historic theater while tearing down walls, and they continued to tear down walls to more prominently feature the exposed brick. 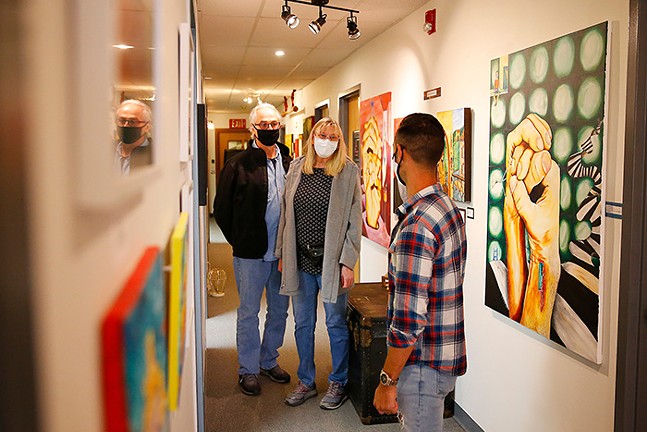 When it came time to find artists to fill the gallery, Camacho leaned on the knowledge of friend George Kollar, who gave him a book of Pittsburgh artists. Kollar — who passed away in December — along with his wife, Deborah Kollar, were the first two artists Camacho asked to exhibit, since they were the first artists Camacho met when he moved to Pittsburgh in 2017. After the first exhibit, artists began contacting Camacho, and now the gallery is booked through September. He and DeFelices are now researching artists for the September through December exhibits. 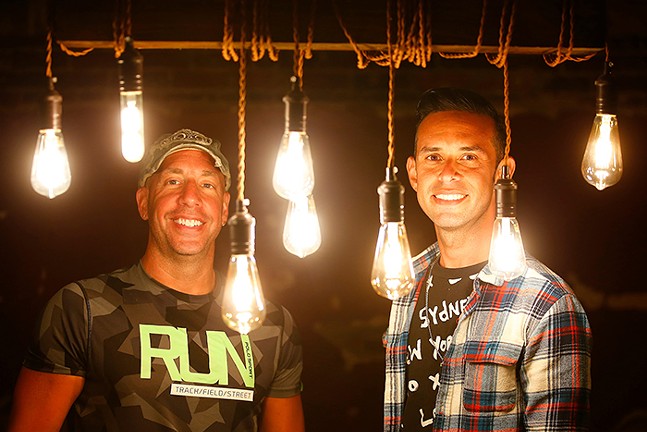 CP Photo: Jared Wickerham
Manos Gallery owners Brian Defelices and Ernesto Camacho Jr.
“I've tried to make my process as simple as possible,” Camacho says. “I want to make sure that the artists that go [to the gallery], they feel as comfortable with the space they're going to showcase their work [in] as we would to showcase theirs.”

If artists and the owners feel that the gallery is a mutual fit, artists can pay a $30 entry fee that allows them to show their art in three exhibits over the term of one year. Artists can work with Camacho and DeFelices to determine the best time for them to exhibit.

“They can choose and pick which exhibits they want to do throughout the one-year process,” Camacho says. “So they can start in April, for example, do their exhibit, and if they do well, and they feel like they had a good experience, they can renew to the next exhibit in May, or they can wait a couple months and come back. That way they can put together a whole new collection if they wanted to.”

The gallery has featured a variety of art, from painted still lifes to charcoal body studies to surrealist paintings. Artists who sell their work can also support causes through a percentage of their art’s sales, which the gallery will promote. Nivedita Eklahare is currently donating 20% of all sales of her painting series inspired by Ada Mae Grashow, who has Phelan McDermid syndrome, to support Grashow’s music therapy.

CP Photo: Jared Wickerham
Manos Gallery in Tarentum
Camacho and DeFelices also host community events, including wine and painting nights and painting classes, that follow CDC safety guidelines for masks and social distancing. The children’s painting classes inspired the gallery’s upcoming kids exhibit in May, for which the gallery is currently looking for artists.

“It really brings me joy to really see them and all the other kids,” Camacho says of the children’s painting class. “And that's what really brought me to do the kids’ exhibit in May, because of all the talent that I've been seeing coming in from all these young kids. So I just wanted to do something to give back to some of these talented young children living in our community.”
Manos Gallery. 320 E. Fifth Ave, Tarentum. facebook.com/Themanosgallery