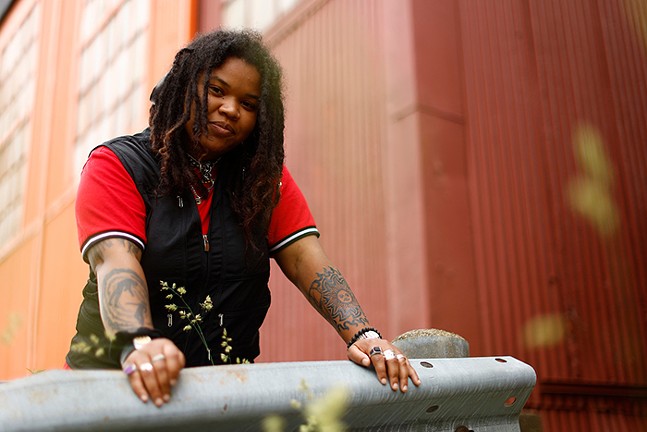 CP Photo: Jared Wickerham
Mani Bahia from Mani Bahia & The Mob
The Dollar Bank Three Rivers Arts Festival is a place for artists of all kinds to showcase what they have to offer, and a chance for the city to meet new and engaging talents. Playing at the festival is a big deal for many Pittsburgh-based musicians, especially those who don’t have a huge following.

Mani Bahia and the Mob is a band that officially formed in the winter of 2019 but had their first show in March 2020 at Pittsburgh’s Very Own before everything shut down. They will be playing at TRAF on Sun., June 12 at the Backyard @ 8th Street.

The description of their performance says to “expect vibrant sounds and refreshing energy” from the band, and Mani Bahia, the band leader, agrees.

Before the band formed in late 2019, Mani Bahia was a young musician trying to make a living doing music full time. She started piano lessons at the age of six and had one of those Barbie guitars that, when you pressed buttons, made the sounds of someone playing guitar. One day she was outside playing with the toy when a neighbor saw her and asked if she wanted a real guitar.

Bahia said yes and the neighbor, true to her word, brought out a real guitar and gave it to her. Bahia says she’s had guitars on and off for 10 years but only really strummed them from time to time. It wasn’t until she was 16 that she started taking music more seriously.

After graduating from high school in 2020, Bahia tried her hand at college but ultimately left because she believed she could achieve what she wanted, to make music for a living, without a degree.

“I come from a lot of people who are either educators or big on education, so it was a goal of my family for me to get a degree. But as I was in school, I was realizing, well, one, this is a big waste of money because there's not anything I’m learning here that I couldn't just go out in the world and learn and do myself and get internships and work my way up with actual experience,” she says.

Bahia started making music as a teen using a USB microphone on her back porch, and ultimately put out her first project, Solstice, which she later pulled from online because, as she explains, the project did not have the proper protections that an artist needs when putting out music. She says that making music over tracks was cool, but around the time she was about to graduate from high school, she really started to work on forming a band, and so the Mob was added to the act.

Bahia met some of the members, including Sawyer, through a program called Center of Life, a music-centered nonprofit based out of Pittsburgh’s Hazelwood neighborhood.

While they’re a Pittsburgh band, Bahia says they have bigger ambitions.

“We love home, we love Pittsburgh, it is where we come from and where we've grown up our whole lives. But in order to be a national band, and even a worldwide band, there's a level of professionalism and seriousness you have to have,” says Bahia. “A lot of times, what you'll see in Pittsburgh is people who love music but don't want to fully commit to doing music full-time because they’ve been told you can’t make a living that way.”

For Bahia, who does music full-time, it was never an option to not follow her passion and find a way to make a living doing what she loves. The rest of the band is on board with her vision, and it was Eric who originally floated the idea that they should perform at the Arts Festival. A few weeks later, they got the official invite email and are excited to unveil what they’ve been working on for the city.

“We're performing on Sunday, which is always funny for us because we have a song that we finish our set off with that is called ‘Sunday Morning,’” she explains. “Even though we're not performing in the morning, it will still be a fun song to perform on that day because the song kind of just wraps everything up to me.” Mani Bahia & The Mob. 5 p.m. Sun., June 12. Three Rivers Arts Festival. 149 Eighth Street, Downtown. Free. traf.trustarts.org