M&J Bistro, on the South Side, offers excellent sushi and Asian-inspired fusion dishes

Nothing about our meal was ordinary, and the highlights were superb 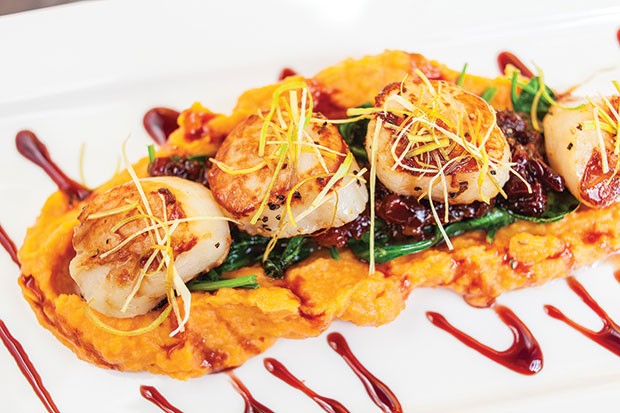 The bistro-style international restaurant is one of our favorite concepts, replacing greatest-hits menus and kitschy bazaar decor with more eclectic, curated selections of dishes and elegantly appointed surroundings. On East Carson Street, M&J Bistro describes its approach as Asian-American, specializing in sushi and “Asian-inspired” dishes.

Executive chef Ricky Kirsop’s credentials are legit: he spent over a decade running the kitchen at McCormick & Schmick’s up the road, where he worked daily with seafood in a fine-dining setting.

The atmosphere at M&J couldn’t be farther from that at the venerable seafood-and-steak house. Here, instead of sedate wood paneling and oil paintings, was an exuberant instance of a particular style that doesn’t quite have a name. The ceiling was comprised of funky drywall curves and the lighting was an LED rainbow centered on a cool blue. M&J’s shiny brightness was supplemented by an enormous photomural of the Golden Triangle at night, as well as dozens of artworks by a range of local artists, part of a café-style monthly series.

At first glance, the menu didn’t go long on its self-proclaimed fusion concept. There were edamame and crab Rangoon; a handful of traditional, mostly Chinese-American dishes; and a peculiar throwback to mid-century continental cuisine, lobster thermidor. But a closer look at the descriptions revealed that very little was as it seemed. The edamame were flavored with Himalayan pink salt and togarashi, a Japanese chili powder, and the short ribs were served with wasabi-spiked mashed potatoes.

Togarashi first made an appearance in the complimentary taro chips that were served, still warm, when we sat down. The slices were the size of dessert plates, yet paper-thin, and the heat from the chilies was subtle and satisfying. It worked well on the edamame as well, although they were served in a bowl with liquid at the bottom, as if not drained completely.

Our other starter was Asian pork buns. Four fat dumplings featured tasty, well-seasoned meat centers that were neither minced char siu nor firm meatball, but somewhere in between; their doughy wrappers were springy, not gummy. These are some of the best pork buns around.

Chicken lo mein was straightforwardly in line with what you’d get at most takeout places, except that it was much, much better. The generous portion of sliced white meat was tender, juicy and flavorful, as if marinated; the mixed veggies were properly tender-firm and bright in color; and the noodles straddled soft and chewy. But where low-grade lo mein is all too often greasy and one-note savory, Kirsop coats his ingredients with just a hint of sweetness to bring out impressive depth of flavor.

Sautéed green beans with black-bean sauce was similarly straightforward, but in this case, so much so that it did not quite make a satisfying main dish. The blistered green beans were tender and almost dry, just lightly coated in cooking oil and tossed with fermented black beans. While this would have been an excellent side dish (in fact, that is exactly how we enjoyed our leftovers), there was just not enough flavor variety here to sustain one palate for an entire meal.

M&J has a full sushi bar with almost two dozen varieties of fish and roe. We explored many of them in the deluxe sushi dinner, which included 10 different nigiri, plus a simple tuna roll. The presentation was gorgeous: a big, square platter with a plastic sakura branch in the middle, ringed with the maki, then sprigs of watercress, then the nigiri, and finally lemon wedges to fill in the corners. The fish lived up to the presentation as well, with the scallop standing out for its buttery texture and luscious sweetness. We were also impressed to see saba, pickled mackerel, a rare treat that’s unusual for its firm texture and bold flavor.

Scottish salmon was crusted with wasabi and ginger, served alongside a cylinder of pineapple rice that was artfully arranged with a sort of waterfall of shredded carrot and snow peas. The salmon was marvelous, cooked a touch past the medium rare we prefer, but still moist. Its crisp crust brought big flavor without overwhelming the salmon; orange-ginger sauce was a perfect complement, reinforcing the ginger in the crust while sweetly countering the zing of the wasabi. In theory, the rice would do the same, but ours was too dry to enjoy, and the carrots were inexplicably bitter.

For dessert, passion-fruit créme brûlée was extraordinary, perfectly crusted with burnt sugar and subtly, yet unmistakably, fragrant with fruit. Maybe the M in “M&J” stands for “Mmm.” Nothing about our meal was ordinary, and the highlights were superb.