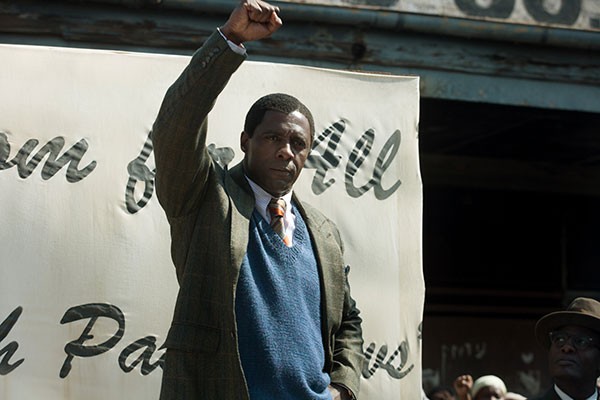 Mandela: Long Walk to Freedom is less a bad movie than an impossible one. Director Justin Chadwick and screenwriter William Nicholson try to cram 50 years from one of the most iconic lives of the past century into a single feature film. So even at well over two hours, and with the very capable Idris Elba as Nelson Mandela, most of it can't help feeling rushed and superficial.

The source material is the late Mandela's autobiography, but Chadwick's movie seldom feels very intimate. Mandela the young Johannesburg barrister is portrayed as a mostly apolitical womanizer, and later we see the toll his early anti-apartheid activism takes on his family. But Long Walk to Freedom is basically Mandela's Greatest Hits, played out against a hastily sketched backdrop of a wrenching half-century of South African history: Cue African National Congress recruiters. Marriage to second wife Winnie Madikizela. Shift from nonviolence to armed resistance. Arrest and trial. Sharpeville massacre. Soweto riots.

Most viewers who'd care, of course, already know the story: Mandela was jailed for 27 years as a terrorist, but his steadfast belief in justice for his nation's black majority culminates in his freedom, free national elections and an historic presidency. Unfortunately, Chadwick doesn't pause for enough of the hows and whys to make the narrative truly engrossing. Long Walk feels like a long historical pageant, the drama drained. And while the film plays up Mandela's brief time as an underground saboteur, we miss politically crucial (if less sensational) elements of his activism, like labor organizing.

By the time the film bothers to focus, it's almost too late. Only in a few scenes, when the now-venerable prisoner-statesman secretly meets with government officials, do we get a solid sense of Mandela the master politician.

Also interesting is Chadwick's focus on the tribulations of Winnie (Naomie Harris), whose treatment in prison was harsher than her husband's (if much briefer), and whose story is less well known. In fact, ultimately, you realize that what Chadwick most wanted was to make a tragic historical romance, in which Mandela's eventual commitment to peaceful change drives a wedge between him and the more militant Winnie. While their relationship warrants a film in itself, it, too, is shortchanged here.

Given Elba's dignified yet passionate performance, Long Walk is a fair tribute to Mandela's towering legacy. But his is a story whose full telling just might require a book — or at least a mini-series.