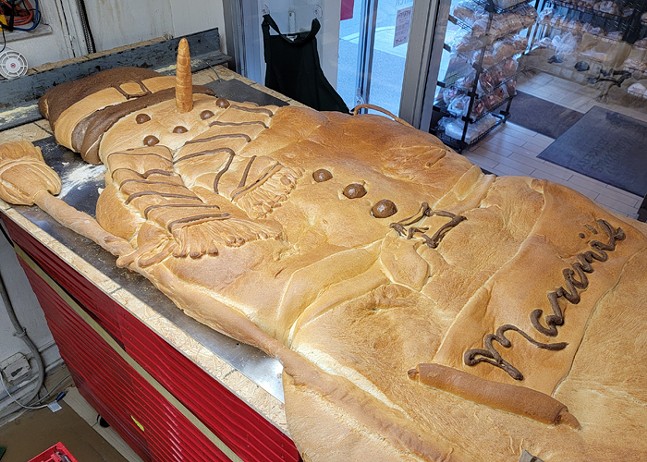 Photo: Courtesy of YaJagoff Media/Mancini's Bread Co.
The Mancini's “doughman”
As Oprah famously once said, "I love bread." And what better time to celebrate bread than now, when holiday dinner guests are greeted with baskets of rolls and slices?

Mancini’s Bakery has decided to take a far more festive spin on the diet staple by making a snowman — or, better yet, “doughman” — out of its Italian-style bread.

The McKees Rocks-based bakery company recently unveiled its life-sized doughman and it will be displayed for public viewing outside of the McKees Rocks store at 601 Woodward Ave. and inside of the store at the Strip District location at 1717 Penn Ave. during holiday operating hours starting Dec. 22.

The structure, which is 7 feet tall and weighs over 200 pounds, was made from “rolls and twists (and maybe a breaded carrot, a pebble or two),” according to a press release. The release goes on to say that it took seven Mancini’s workers to put and pull the doughman out of the oven.

This is the second year Mancini’s has played with its food — last year, the bakery delighted customers with an 8-foot-tall Christmas tree.

This time, however, the bakery left it up to the public to pick what bread creation would be made. A poll was launched on Mancini's official Facebook page asking for users to vote for either “a Guinness World Record-breaking Christmas Tree or a snowman all made from its finer Italian bread.'' The snowman won.

Guests stopping by the store or waiting to pick up an order are welcome to take selfies with the doughman, which will remain up at either the McKees Rocks or Strip District location until the New Year. After that, the bread will be recycled through one of Mancini’s “community partnerships with local food banks and nonprofits.”