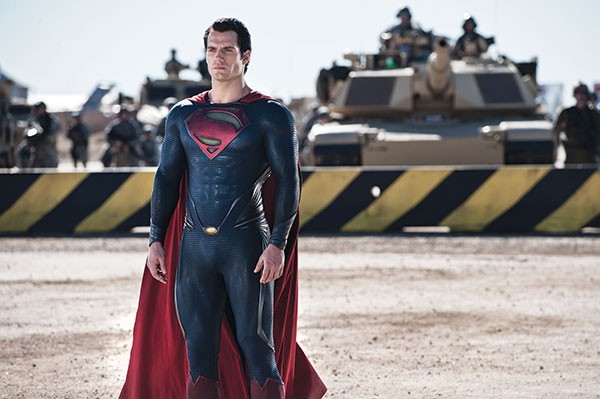 A lot of stuff blows up or is otherwise epically destroyed in Zack Snyder's Man of Steel. Another thing that might also crumble is your expectation for a decent summer popcorn film, because this tedious slice of noisy chaos isn't it.

Man of Steel is the Superman origin story — it even opens with his gooey birth! From doomed Krypton, the baby is sent into space. His pod lands on Earth, and the newly christened Clark Kent is raised in Kansas. He has a weird childhood as his extra-ordinary powers begin to manifest (X-ray vision, super strength). Somehow, the adult Kent winds up in the Arctic, where he finds a hologram of his bio-dad (Russell Crowe) pacing aboard a long-buried Krypton ship. The holo-pop informs Kent of his vaguely defined destiny: "Give the people of Earth an ideal to follow. ... In time, you will help them accomplish wonders."

But mostly what happens is a Krypton bad guy named Zod (Michael Shannon) gets defrosted and comes to Earth to beat some genetic material out of Superman and turn our planet into Krypton II. Superman fights back, and we get two hours or so of super-pumped-up, straight-outta-Krypton ass-kicking, while Earthlings look on in fright and dodge falling skyscrapers.

Snyder, who gave us 300, delivers another CGI-palooza that, despite its many antecedents, lacks real characters or plot. I didn't care about Superman, Lois Lane (poor Amy Adams), Kansas, Earth turning into a weird bouncy ball and so on. I just wanted all the non-stop hurtling and crashing and yelling to end before a Transformer showed up.

Superman doesn't seem to care, either. He tackles his assignment, but with all the enthusiasm of a guy ordered to dig ditches. Cavill looks like a winning hero: He is appropriately square-jawed, and since he's introduced shirtless, we see that he doesn't need any fake muscles sewn into his spandex suit. But his performance is flat: Kent seems not-human, which I suppose is true, but he's also not making an effort to fit in. Here on Earth, we like animated people with easy-to-read emotions. Also in our movies.

The screening audience didn't seem particularly into it, either: Nobody cheered, despite Superman's various heroics; there was only one laugh; and the biggest crowd reaction was the disappointed muttering that arose when there was no bonus scene after the credits. (There, I just saved you five minutes.) Sadly, a sequel seems inevitable, or at least planned. Eagle eyes will spot a LexCorp logo, and frankly, much of the film feels like a prologue for a (hopefully) more interesting conflict.