Man of La Mancha at The Company of Pittsburgh

Darrel R. Whitney really looks and sounds like he would try to wrestle a windmill. 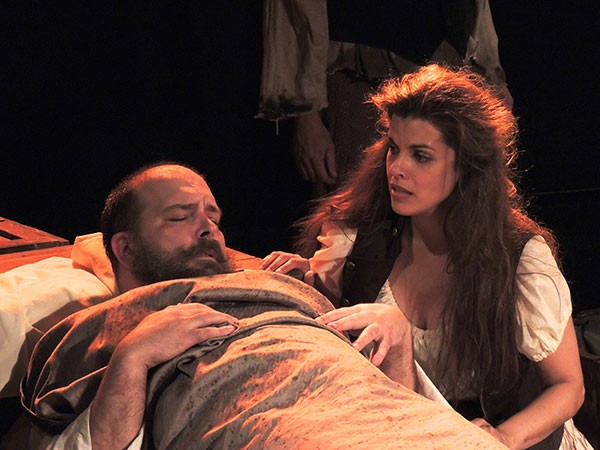 Darrel R Whitney and Zanna Fredland in The Company of Pittsburgh's Man of La Mancha.

The Company of Pittsburgh at Off the Wall Theater,
25 W. Main St.,
Carnegie.
$20.
companyofpgh.org

It was Picasso himself who painted the most iconic image of Don Quixote — a black-and-white sketch of a skinny old man on a horse, little Sancho at his side, and windmills all around.

Like Picasso, the brand-new Company of Pittsburgh has chosen the most famous story in Spanish literature and taken ownership. Man of La Mancha is a Broadway classic, a subversive '60s spin on Quixote, and director Ted Watts Jr. takes the interpretation one step farther. The resulting production is stripped-down, brave and ultimately fantastic, in every sense of the word.

For starters, actor Darrel R. Whitney is not the beanpole knight errant, but a burly and bearded caballero, like the understudy for a Dos Equis commercial. He is a fair singer and actor, but Whitney's real asset is his Hemingwayesque charisma; he really looks and sounds like he would try to wrestle a windmill. As Sancho, his goofy sidekick, Bret Sloan is less diminutive and meek than gregarious and fun-loving. Whitney and Sloan share a delightful rapport, and one wonders, halfway through the show, why everyone doesn't go adventuring.

Conceived by Dale Wasserman, Joe Darion and Mitch Leigh, the original La Mancha was an existential experiment, where Miguel Cervantes lands in prison and must explain himself to thieves and murderers. As the failed poet tells the story of his mad Spanish knight, the inmates improvise supporting roles, until the dungeon becomes an entire fictional world. Cervantes plays Quixote, sings some of the most romantic songs in musical history, and then the Inquisition hauls him into court. In the rebellious spirit of the Vietnam era, La Mancha questioned authority, sanity, reality and justice.

Watts distills the staging into its essential elements. The uncredited costume design is earthy and period-accurate; the actors really look like culprits impersonating peasants. In place of an orchestra pit, Michael Borowski and Nathan Zoob play the entire score on guitars. A few singers are astonishing, such as Zanna Fredland as Aldonza, local tavern wench and Quixote's female obsession. But the cast's mixed abilities add up to far more than the sum of their parts. Small companies take note: This La Mancha surpasses its impossible dream.