Man behind Pittsburgh Good Deeds is 'just a regular dude, repairing roofs for free in the middle of a pandemic' | Community Profile | Pittsburgh | Pittsburgh City Paper

Man behind Pittsburgh Good Deeds is 'just a regular dude, repairing roofs for free in the middle of a pandemic' 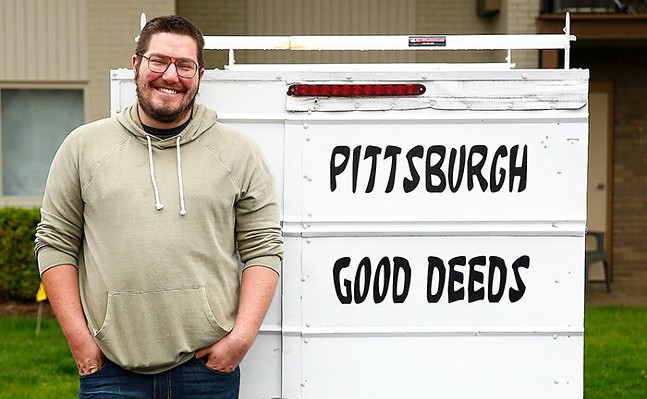 CP photo: Jared Wickerham
Jon Potter, of Pittsburgh Good Deeds, poses for a portrait near his home on Sun., May 3, 2020.
During this pandemic, people have come together through fundraisers and mutual aid in big ways. Usually, financial donations are done through GoFundMe or another official fundraising platform. But Jon Potter, often known by his handle pghparagliding, raised over $20,000 on Reddit and has given almost all of it away, also on Reddit, to strangers who need help.

A few years ago, Potter began helping people who posted in the r/Pittsburgh subreddit with handyman tasks like installing an antenna or plumbing repairs. Eventually he created another subreddit, called Pittsburgh Good Deeds (r/PittsburghGoodDeeds), where people can ask for help and Potter, or one of the 1,000 other members, can offer to chip in. Requests come in for things like getting a ride to a food bank, fixing a leaking roof, repairing a washing machine, and other tasks.

Only once has physical labor taken on an extreme meaning. Last August, one of Potter's good deeds went viral when he donated a kidney to a stranger who he found on Reddit. The story was featured everywhere from the Washington Post to People magazine.

Now, Pittsburgh Good Deeds is a small nonprofit. Potter and his single employee do general handyman repairs, and they do about half of them for free. Right now, they are focusing mostly on roof repairs to avoid physically entering peoples' homes.

Before the pandemic hit, Pittsburgh Good Deeds rarely gave financial assistance, mostly focusing on physical fixes. But since so many people have lost their jobs or wages amid the fallout, there has been an increase in people asking for help buying groceries or paying rent.

Last month, when Potter received a $1,000 Hometown Hero award from KDKA radio's Larry Richert, he posted to Reddit asking if anyone needed financial assistance. He gave it all away once people started messaging about bills they needed help paying, but something else happened. In the original post, Potter added at the end that people could "chip in" if they wanted, so he could give away more money. Through that post, he raised about $8,000 and gave that away, too. Two weeks ago, he posted on Reddit again, ready to give away another $13,000.

On Tuesday, when cat cafe Colony Cafe announced they were closing, Pittsburgh Good Deeds covered the adoption fees for nine cats. Not just anyone could gain the trust of hundreds of strangers on the internet and collect their money through an unofficial channel. He says the track record he's built up over several years is responsible.

"That hit me when I was tallying up everything and getting ready to give out a second round of money, I was like, 'These people really, really trust me,'" says Potter. "It's an absolute honor. I'm very humbled that people do trust me to that extent." In return, Pittsburgh Good Deeds requires a trust in strangers from Potter. When he says he's giving away money, he has to trust that the people asking really need it.

"So far, 30% of people who asked for money asked for someone else, either a neighbor or a coworker, or even an employee," says Potter. "That's really encouraging."

He says that while there is the occasional dishonest or disingenuous person, it's more common for the general community to label a call for help a scam. Last year, a man posted about contemplating suicide due to unpaid bills. Other Redditors thought it was a scam and took the post down. Potter loaned him $2,000 and the two became friends.

"I never really intended for it to be this huge mission of kindness, but it's sort of starting to become that," says Potter. "I always just say I’m just a regular dude that just kind of stumbled into this."

Just a regular dude, repairing roofs for free in the middle of a pandemic.