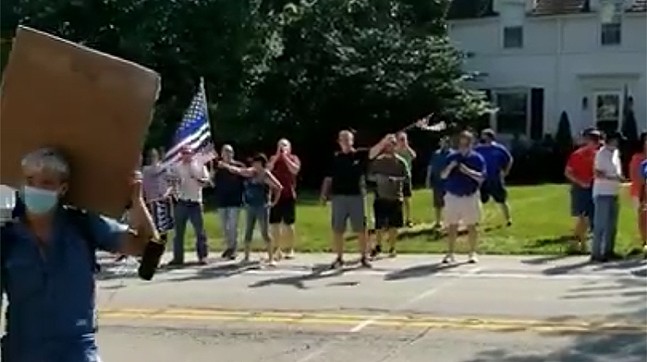 Screenshot taken from video
Pro-police protesters next to Mt. Royal Boulevard in Shaler
On Sat., July 25, a group of about 150 demonstrators gathered in front of Shaler Area Middle School to show solidarity to the Black Lives Matter movement. According to Christopher Chirdon, who lives in Shaler and both attended and helped organize the event, the rally was largely led by young people of the group called Shaler Area Anti-Racist Advocates.

From 4-5:30 p.m. on Saturday, the Black Lives Matter protesters set up on the lawn of Shaler Area Middle School, which Chirdon says is like a de facto public gathering place in Shaler for many events. He says the event was peaceful and was part of a larger push in Shaler to get the local school district to enact anti-racist policies.


The leader of a Back the Blue rally in Pittsburgh switched from chanting "All lives matter" to "Kill transgenders" pic.twitter.com/T6ZaEyj4sN

Chirdon spoke with Pittsburgh City Paper and says that many people at the protest also heard the man threatening transgender people and using anti-LGBTQ slurs. He confirms the authenticity of the video. Chirdon says that he knew of at least two trans people present at the Black Lives Matter demonstration.

“A lot of people said in the group that it hurt them,” says Chirdon of the counter-protesters threats and slurs.

The entire more than 90-minute audio of the event was posted on a local blog, which can be heard here.