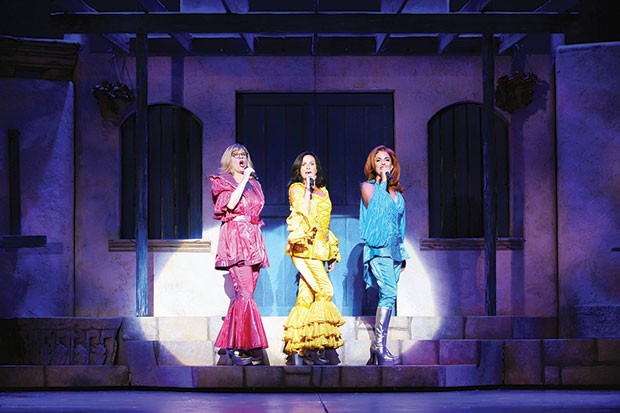 There’s a trope that every musical ends in a wedding. Mamma Mia! promises the same, but instead of “Here Comes the Bride,” the audience is taken through the greatest hits of ABBA.

The Broadway mega-smash starts with Sophie, who in Pittsburgh CLO’s new production is given the buoyancy and freshness of a Grecian breeze by Erika Henningsen. (Keep an eye on Henningsen; in October, she’ll originate the role of Cady Heron in the Broadway-bound Mean Girls the Musical.) Sophie is trying to reconnect with a father she never knew before her wedding. The only problem is that, after reading about her mother’s old flings in her diary, she realizes that there are three potential candidates.

Benny Andersson and Björn Ulvaeus, original members of ABBA, provide music and lyrics that wash over the audience with nostalgia and cleverly push Catherine Johnson’s book forward. It’s nearly impossible to not tap your foot or sing a few verses out loud. But though the show is filled with vitality and romance, the ensemble does seem thrown off balance onstage. Barry Ivan, in the dual role of director and choreographer, would’ve benefitted from cutting down the onstage commotion. Actors pulled focus when doing remedial tasks like wiping down stone walls or tossing pool floaties. And this skilled ensemble could’ve handled more dexterous choreography to accompany their energized vocals.

Still, the leads are steadfast in making the show a success. Sally Ann Triplett gives Donna, Sophie’s mother, an endearing laissez-faire attitude but tackles her vulnerability with greater commitment, like in “The Winner Takes It All.” At the root of Donna’s woes are the three potential fathers whose charm gives each the chance to win us over. Though more attention is given to Matt Bogart’s Sam, Rick Negron and Christian Whelan give Harry and Bill, respectively, plenty of heart.

Mamma Mia’s music and wit carry the show through its plot troubles, which are all well-forgiven. It’s ABBA; what’s there to be that mad about? Despite a need for focus during company numbers, Lori Hammel’s breakthrough in “Take a Chance on Me” demonstrates that Pittsburgh CLO’s production is led by a stellar group of women — “Dancing Queens,” one might say.