Madeline's Madeline is an experimental ride through art, illness, and control 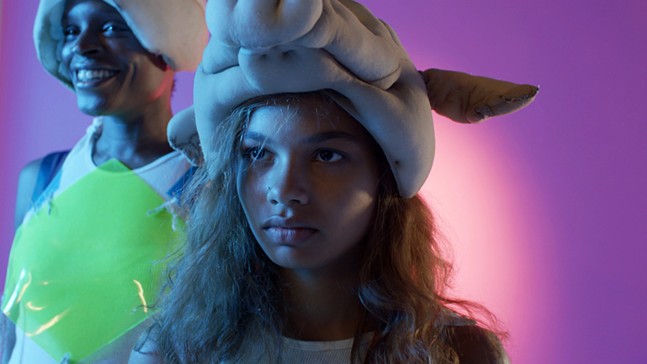 Courtesy of Oscilliscope Films
Madeline's Madeline starring Helena Howard
The eccentric auteur is a familiar fixture in film, both behind the scenes and on the screen. Certain audiences revel in seeing someone — usually a man — so consumed by achieving their brilliant vision that they are willing to step on or over everyone around them in the process. In Madeline's Madeline, director Josephine Decker explores how the story differs when the auteur is a woman.

Madeline (Helena Howard) is a 16-year-old girl in a very experimental and very adult theater troupe. Her single mother Regina (Miranda July) is concerned about the toll the theater group is taking on her daughter, who struggles with mental health problems. The troupe's director, Evangeline (Molly Parker), has a vague but intense vision for her next project, of which Madeline, and her life, are at the center. As the play, and Madeline's relationships, intensify, the line between art and reality gets blurrier.

As director, Evangeline is completely consumed by the endpoint of her art, although even she doesn't have a clear vision. Instead, the work shifts as she siphons Madeline's emotions and dreams, into the still-forming play, which resembles fiction less and less until the two halves collide.

Madeline struggles to stay in the real world and act like a normal 16-year-old when she's surrounded by dramatic adults who value art over everything. Evangeline achieves the role of Art Monster, the term Jenny Offill coined in her book Department of Speculation; "Women almost never become art monsters because art monsters only concern themselves with art, never mundane things." Evangeline is not concerned with how her approach to art is causing Madeline to unravel, because the unraveling only makes her art more interesting, more real. Her tactics are closer to Stanley Kubrick abusing Shelley Duvall on the set of The Shining than that of the cool, calm, put-together New York woman she appears to be on the outside.


Watching Madeline is a visceral experience: uncomfortable, immersive, confusing, chilling. It tackles familiar topics like mental illness, art, motherhood, but not a familiar way. The illness is uglier, the art stranger, the motherhood more intense. It has the unpredictability of a horror movie, and a general feeling that the characters could inflict great harm on each other.

As Madeline, Howard has a controlled, unnerving intensity. It's scary, really, to think of what she might be capable of in future projects. She screams, cries, laughs, laughs maniacally, oinks, purrs, all from the gut. Even when completely silent, her stare is like a snake's.

They play very different mothers, but both Parker and July are made for their roles (or vice versa). Parker has the powerful calm of a Stepford wife turned wellness guru, while July is a jittery, full of chaotic worry.

So much of art is about ownership — who gets to tell certain stories, who gets credits, who has the power. The movie asks all those questions and leaves them unanswered to all except Decker, who has complete control over her vision.