Mad Noodles, on the South Side, offers far more than Asian-American cliches

The menu is anchored by about a dozen noodle soups and plates, with some rice dishes and stir-fries 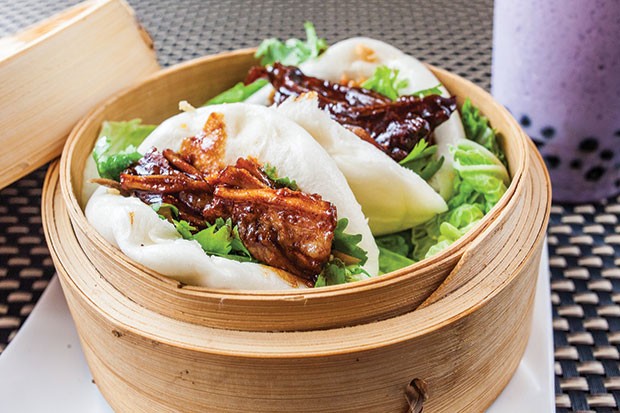 New Noodles
The pork buns are superb examples of their type

The restaurant industry is famous for its rapid rate of turnover and change, but the interval between M&J Bistro on East Carson Street and its successor, Mad Noodles, was exceptionally brief. Such a quick transformation can be explained, not by any catastrophic failure, but rather by continuity: when the co-owner and chef of M&J departed, the remaining partner stayed in business under a modified name, tweaking the concept but leaving the brand new — and, in our opinion, wonderful — interior in place. At Mad Noodles, the former sushi bar now serves as a bubble-tea station, and the full bar up front serves booze.

As the new name suggests, the menu is noodle-centric, but this isn’t part of the hand-pulled noodle trend, nor an extensive tour of the noodles of the world or even of a single cuisine. Instead, Mad Noodles’ pan-Asian menu is anchored by about a dozen noodle soups and plates, and rounded out with braised dishes over rice and just a couple of stir-fries.

The menu was all too brief in its descriptions, an approach which can raise more questions than answers when the cuisine spans half a continent. Take “noodles with minced pork sauce”: Were they Chinese, or of a different cuisine? And if they were Chinese, should we expect a mild Cantonese dish, something fiery from Sichuan or non-committal Chinese-American?

We could at least rule out the latter. While Mad Noodles wasn’t a daring exploration of obscure regions, neither was it merely gussied-up food-court fare. A clear indication of that came in the form of rolled pancakes with beef (duck is also available): thinly sliced beef, rolled up in a flaky pancake, sliced and served maki-style and drizzled with a bold, sweet-savory sauce. We’ve seen similar preparations before, but the texture and flavor of this roll were both so good, we hope this preparation catches on even more widely.

Thai curry beef noodle soup appeared to be a bit of a misnomer. Even after asking our server to describe it, we were surprised when, instead of a bowl of curried broth, we received a shallow dish of noodles ladled with a creamy-textured yellow curry sauce and arrayed with a pinwheel of thin beef slices. The attractive presentation made it easy to adjust the proportions of starch to sauce to protein in each bite. With the meat’s robust notes as a counterpoint to the curry’s assertively piquant ones, and the noodles threading and binding the tastes into a complex skein, this was a much more elegant dish than a soup — with its chance encounters of ingredients in each spoonful — could ever be.

Soup dumplings may be approaching ubiquity, but perhaps with declining returns. Mad Noodles’ version was a little short on the actual soup part, with only a couple dumplings in our serving really delivering that characteristic burst of umami-packed broth. By contrast, pork buns — one of the few holdovers from the previous menu — remain superb examples of their type, with wrappers that were springy, not gummy, and filling that was meaty and bold enough to flavor all that dough.

Any Asian noodle place will have pad Thai, but this version was unusual, first for having a bit more spice than typical, and second for lacking the tanginess that, paired with tamarind sweetness, is one of the hallmarks of the dish. Liberal squeezes of lime helped.

Ramen came in two forms, one with beef broth and another with miso-derived broth and pork belly. The thinly sliced pork was pretty good, but the generous portion of greens was excellent, including both tender leaves and crunchy stalks. The broth wasn’t identical to a simple miso soup, but its warm, vegetal savoriness made a pleasing alternative to clear, protein-based broths.

What Mad Noodles calls “flat rice noodles” was a dish reminiscent of pad see ew, but these noodles came in an assertive, umami-rich brown sauce that could be described as generic if it weren’t so delicious. All four in our party took tastes, then reached our chopsticks back eagerly for more. The exceptionally broad noodles were pleasingly chewy with a modest portion of beef and scallions to enhance them, rather like the Italian way of going easy on the sauce so the underlying pasta can shine.

Mad Noodles’ attention to quality, preparation and presentation were evident in every dish we ordered, even the imperfect ones. Overall, as a streamlined collection of noodle dishes from a variety of cuisines, Mad Noodles serves far more than Asian-American cliches.