John Guare is perhaps the greatest unknown playwright working today. If you know him at all, it's probably from his biggest commercial success, Six Degrees of Separation. If you're an occasional theatergoer, you might recognize his comedy/drama The House of Blue Leaves. If you're into offbeat films, maybe you've seen the 1981 pic Atlantic City, which he scripted. My first exposure to his work came in 1981, when I saw a production of Landscape of the Body that, quite literally, changed my perception of the possibilities of theater.

Guare's most amazing quality is his talent for writing bruised, intensely human characters, all seeking safe haven from a punishing world. The breathtaking resolution of a Guare play isn't that he gives his characters what they want; rather, he lets them evolve into people who want something more.

One of the heartbreaking entries in the Guare catalogue is Lydie Breeze, a play he's been working on for at least 25 years, with different titles and components, but which has never met with the same critical success as his other work.

Open Stage Theatre presents the Pittsburgh premiere of the 2000 version of Lydie Breeze. It's in two parts -- "Bullfinch's Mythology" and "The Sacredness of the Next Task" -- performed separately, with each running about two-and-a-half hours.

All of the above is a way for me to put off saying what I really don't want to say: Ambitious though Guare and Open Stage are, and I salute them for it, it probably would have been best if they hadn't bothered.

The central story concerns Lydie Breeze herself, a nurse during the Civil War who talks three ex-soldiers into starting a utopian commune. Needless to say, it doesn't go well (this is a play, after all) and the five-plus hours we spend detail the commune's collapse and the 20-year fallout.

Actually, that's not entirely true. The play spans 20 years, but each of the four acts takes place on a single day. So while the action happens on four days, the events making up the play occur sporadically over two decades. Consequently, much of the five hours is spent listening to people talk about things that happened off-stage years earlier.

A huge chunk of this play is written in the past tense. We never see when the four decide to start the commune, for instance, and we never see when the commune is blasted apart -- two scenes essential to this story. We hear about these events -- and many, many more -- in moving monologues. But, honestly, five hours of theatrical time needs to be made from drama, not reportage.

Open Stage director David Maslow and his cast, led by Diana Ifft, as Lydie, and Sam Turich, attack the play with tremendous energy and drive. But, really, they can't create a cohesive, compelling piece of theater where none exists. They try, God knows they try. (What an effort getting this show up must have been -- from the cast and crew to the designers and staff!) But to no avail. At times all that strain shows; at other times, gimmicky, non-period playing is used simply to entertain an uninvolved audience. But most of the time, playwrights, company and audience are all adrift.

Considering that it's John Guare, Open Stage and theater artists I admire, nobody's more heartbroken than I.

Lydie Breeze continues through May 4 (with "Bulfinch's Mythology" and "The Sacredness of the Next Task" running alternately). Open Stage Theatre, 2835 Smallman Street, Strip District. 412-394-3353 or www.openstagetheatrepittsburgh.org 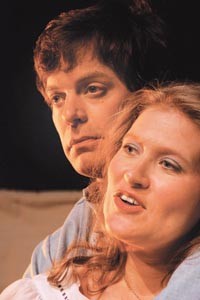