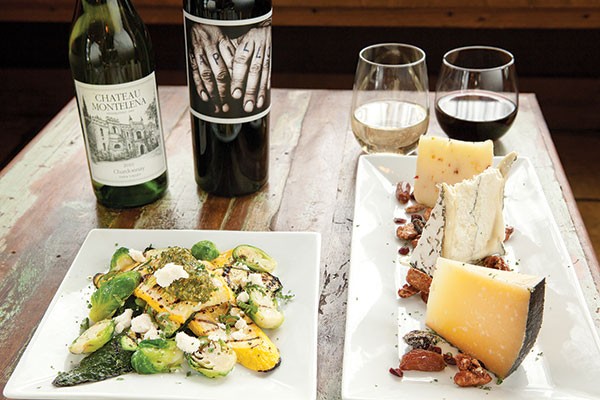 Tapas developed in Spain, where, it is said, both the heat and the languorous nature of mealtimes dictated lighter, more modular menus than the traditional entrée plates heaped with meat, starch and veg. Since tapas arrived stateside, recipes have departed from Spanish tradition, but the fundamental "small plate" concept has caught on big. Because, really, is there a better style of food than tapas for sitting outside, with friends, sipping wine, on a summer evening? After our visit to Lula, our answer is an emphatic "no."

Lula is located in a "flatiron" building — one whose shape hews to the wedge of a triangular intersection — in the heart of Sewickley. This affords its interior broad window-walls on two sides and a well-lit bar on the third. The space's former tenant was a wine bar, and while Lula's emphasis on food is a bit more forward than its predecessor's, the bar remains at the heart of the establishment. The seating is informal, mostly lounge-style, on couches and stools rather than proper tables and chairs. Outside, small café tables line the sidewalk, and we pushed a few of these together to make the most of a perfect summer evening.

Here we ordered most of the menu. The selection was eclectic, certainly not strictly (or even loosely) Spanish, but suggestive of Mediterranean cafés, with plenty of seafood, cured meats, cheeses and summer-fresh produce. Portions were adequate for sharing among our party of six, and because a few items were out, we weren't overwhelmed. The outage was apparently due to a vacation on the part of the head chef, who, according to our server, typically makes a daily trip to the Strip for provisions, letting him tailor options to the best available produce. Fresh figs, thus, had not been procured, but there was little else that we missed, and the overall quality of our meal testified to the establishment of a high standard in the kitchen.

And Angelique was still able to satisfy her fig craving with a plate of toast rounds topped with fig jam, goat cheese and paper-thin slivers of ham, all drizzled with a syrupy balsamic glaze and a confetti of basil. The resulting combination of sweet, tangy, salty and smoky flavors was nothing less than luscious.

Mini lobster melts featured the same baguette slices sandwiching some fine lobster salad, but the open-face technique which was so successful with the fig toasts would have helped the lobster play a more suitably prominent role.

Tuna tartare was cleverly served rolled in translucent slices of cucumber, a preparation which honored this classic pairing, suggested sushi maki and portioned the tartare for easy sharing, all at once. A mild soy emulsion and spicy sriracha sauce allowed each diner to customize his or her bite. A smoked-salmon plate, meanwhile, did not stray from traditional accompaniments such as capers and more baguette rounds. Caprese salad was also spared an update, though the wan tomatoes were a disappointment, especially this time of year.

Perhaps the best presentation of the evening was spears of white asparagus wrapped in ham, drizzled with a balsamic reduction, and accompanied by slivers of lightly roasted sweet orange pepper. The asparagus, more mildly flavored than its green cousin, was perfectly tender, while the salty ham was well balanced by the subtly smoky peppers and the sweet-but-not-too-sweet sauce. 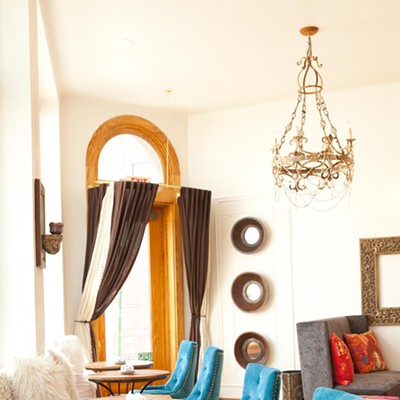 Grilled vegetables — squash, zucchini, peppers and tomatoes — are a virtuous, if frequently uninspired, staple of simple summer cooking. Lula made theirs practically decadent with the addition of a lush pesto and crumbs of creamy, salty feta cheese.

Toward the bottom of the menu are more substantial items, including filet mignon, lamb chops and a scallop dish. The scallops were out, but we were very pleased with the supple filet with fig sauce. Truffle frites took shoestring potatoes to their inevitable conclusion, being literally the thickness of a hefty string. They were addictively crispy and laced with just enough truffle oil to add earthiness without funk.

We wish every town and every neighborhood had an establishment like Lula, where the experience of tapas — casual, sociable, affordable and delicious — is realized with such competence and care.