The story of Luke Wholey's Wild Alaskan Grille begins with a sidewalk grill set up in front of ... no, wait. It begins with his family's iconic Strip District fish market and grocery ... actually, no. It starts 100 years ago in McKees Rocks, where Luke's great-grandfather sold eggs and butter to railroad workers. Since then, Wholey's fish market has moved to Pittsburgh and become a local landmark, offering sustenance, delight (in the form of great white sharks, sting rays and other exhibits from the deep waters where fishing boats trawl) and comfort (in the form of great big fried-cod sandwiches).

Luke Wholey says that he never considered a path away from seafood, and spent time exploring the streams of Alaska before returning home to operate, for a couple of years, that sidewalk grill in front of the family store. His innovation gave fish-market patrons the option of grilled sockeye salmon, vegetables and steamed rice in addition to the deep-fried fare offered within. But young Wholey had grander visions, and this summer relocated his grill to the front of his own indoor, full-service restaurant at the other end of the Strip.

Luke Wholey's space is large and lofty, in true Strip style, and decorated with mounted fish (some of Hemingwayesque proportions) and fish paintings from around the world. The walls also boast images of Pittsburgh, in particular, Wholey markets past and present. In a town where so many restaurants are decorated with the same dozen black-and-white images of historic Pittsburgh, it's nice to see a more eclectically curated take on the subject.

Though Luke Wholey's now has four walls and a roof, the menu is not actually that different from its sidewalk-based antecedent: grilled fish, with a few different sauces, served alongside grilled vegetables and rice or fingerling potatoes. For starters, familiar choices like calamari, steamed mussels, crab cakes and grilled corn with feta cheese and scallions provide variety, if not invention. Naturally enough, Luke Wholey is hanging his hat not so much on creative cooking as on impeccably fresh fish, well prepared.

We're pleased to report that his hat is safe. Calamari — a recent addition according to our server — is a good exemplar. Tender calamari should be a given, but Wholey's adds a certain heft: The rings were thick, almost juicy, and the light coating of flour, pepper and herbs was perfectly proportioned. Marinara sauce for dipping was fresh and bright, almost like an Italian salsa.

The mussels, also served with marinara, weren't quite as successful. They were on the small side, and the marinara sauce with Parmesan tended to be either too little, when the sauce ran off, or too much, when a big, juicy blob of tomato muscled aside the shellfish itself.

Raw Blue Point oysters were very fresh, briny-sweet and an excellent price at $2 apiece. We liked being able to order just as many as we wished, when so many restaurants foist a half dozen on you; that's a lot of oysters when just one or two in your party like to eat them.

Our entrees spanned meaty yellowtail and swordfish, succulent shrimp and scallops, as well as a beef steak. The yellowtail had a spectacular texture, extraordinarily light for a fish steak. Angelique is not a fan of teriyaki-style sauces, but Jason thought the "sweet soy" sauce on this dish avoided the unctuous perils of most sticky-sweet Asian sauces. A side of diced peppers and zucchini was bright and fresh, but slightly smoky from the grill, while asparagus — served alongside the shrimp and scallops — was beautifully charred.

Swordfish with a garlic-ginger sauce was served on a bed of savoy cabbage cooked with bacon, a hearty combination whose salty, smoky flavor profile complemented the zingy preparation of the fish. Meanwhile, the fish itself was swordfish at its flaky, moist and tender best. 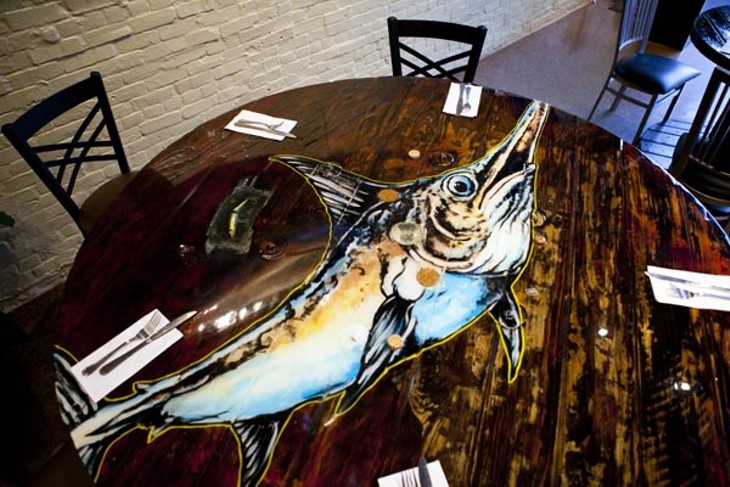 Grilling shrimp is a challenge for any chef, but Wholey showed his chops with tender, sweet ones. They boasted more flavor than a sauté pan usually imbues, but with none of the drawbacks of intense fire. On the other side of the land-and-sea platter, strip steak was tender yet hearty and beefy, showing the kitchen's ability to move nimbly between delicate and sturdy meats.

With access to seafood as good as any in our inland region, Luke Wholey has carved a new niche for himself in a 100-year-old family business. His simple, fresh approach focuses on his strengths and plays to the preferences of a modern, health- and eco-conscious clientele. If the price jump from the sidewalk to the table seems a touch steep, the transition from takeout containers to china plates is one whose time has come.