"This sandwich covers every taste sensation you could ever have." 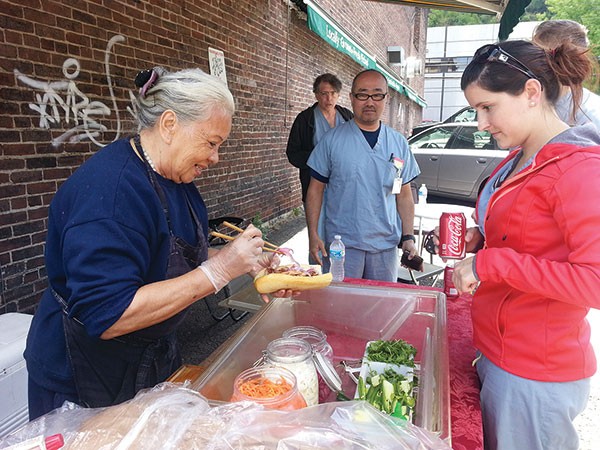 Pull Quote: "A lot of it is Lucy herself. The food is good, but I'm also taken care of here."

When 71-year-old Lucy Nguyen set up her grill and the table full of pickled ingredients in the Strip District two weeks ago, the texting and Tweeting and Facebooking began: "Look who I found!"

Jeff Guerrero was one of those who spread the word, texting 20 friends on Nguyen's first day: "Lucy is back from Vietnam."

"She sold out of hoagies before I got here," Guerrero says. "I kinda shot myself in the foot."

Nguyen is an established, and beloved, Strip District tenant who began selling the sandwiches outside of My Ngoc, the restaurant she ran for about 16 years. Though she has since closed the restaurant because it was "too much work," she still maintains her cart, now located in the parking lot of Bar Marco, from spring to late fall. She spends winters in her native Vietnam.

Nguyen's story is one many of her customers know: She moved to Pittsburgh more than 40 years ago, following her husband, a serviceman whom she met in Hue, Vietnam. They had three daughters. Nguyen worked in hotel housekeeping before opening her restaurant.

Guerrero says the food isn't the only reason he gets excited about seeing Lucy: "A lot of it is Lucy herself. ... [T]he food is good, but I'm also taken care of here."

Nguyen has been known, for example, to refuse payment when a loyal customer is down on his luck. She is mothering in other ways, too — quick to introduce others to new flavors and foreign foods.

"This sandwich covers every taste sensation you could ever have," says Eric Tolchin, another regular who brought a handful of work colleagues by Nguyen's cart last week after he discovered she was back.

"Today is the greatest day of my life," he exclaimed as he approached.

Turning to his co-workers, whom he hoped to turn into new disciples, he said: "This is the greatest sandwich you'll ever have. That's all you need to know."