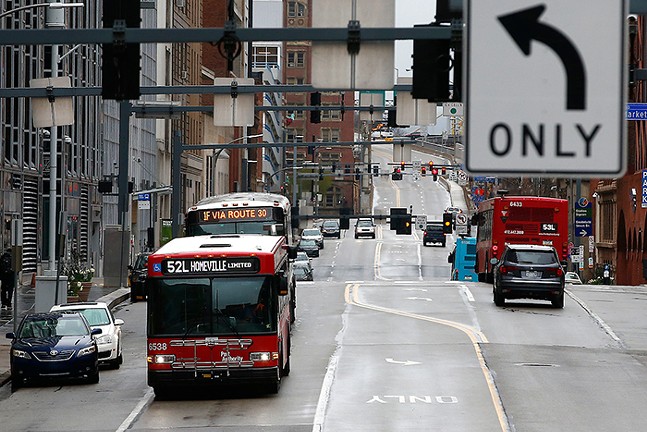 CP photo: Jared Wickerham
Buses in Downtown Pittsburgh
Pittsburgh remains a relatively good city in terms of rates for public transit and walking to work, according to recently released data from the U.S. Census' American Community Survey. But the data also reveals that low-income commuters are becoming increasingly reliant on those forms of transportation, and advocates are using that data as a call for more investment in programs to help these commuters.

According to the American Community Survey one-year estimates compiled by Bike Pittsburgh, the number of transit commuters who are below the poverty line increased by about 11% from 2010-2019. This is while the total number of low-income commuters over the decade decreased by 6%, showing a stark increase in transit use among people below the poverty line within the city.

The data indicates that commuters below the poverty line are becoming increasingly reliant on public transit and alternative transportation like walking, biking, and ride hailing. And another significant statistic is the data shows that Black Pittsburghers have increased their walk-to-work rates by 113% between 2010-2019.

Laura Wiens of transit advocacy group Pittsburghers for Public Transit says the trends just back the group's push to provide reduced and free fares for certain low-income riders. PPT has been asking the Port Authority of Allegheny County to provide free rides for SNAP-eligible passengers since last May, as a means of providing some economic relief for low-income riders during the pandemic.

“It is important that we ensure, at a minimum, that we make transit affordable,” says Wiens. Port Authority rides cost $ 2.50 on ConnectCards and $2.75 in cash.

Wiens also notes that the increase in low-income commuters' reliance on public transit might seem like a clear-cut win for transit advocacy, but she notes that some low-income riders might be pushed out to neighborhoods with worse transit access, but are still reliant on transit anyway. She says this is why it is important for the city to update its land use policies and encourage the construction of affordable and subsidized housing near good transit.

Wiens says that public transit agencies in the Pittsburgh region are set to get about $250 million in federal COVID stimulus funds that were recently approved, and she hopes that a share of that can go to initiatives specially targeted at low-income transit riders.

The American Community Survey data also shows that 17.6% of Pittsburgh’s commuters use public transit, which is the ninth highest rate in the U.S. among cities. Nearly 11% of Pittsburghers walk to work, which is the fifth best in the country. Since 2010, Pittsburgh’s bike to work rates have doubled from about 1% to 2%, but appear to have plateaued since 2016.