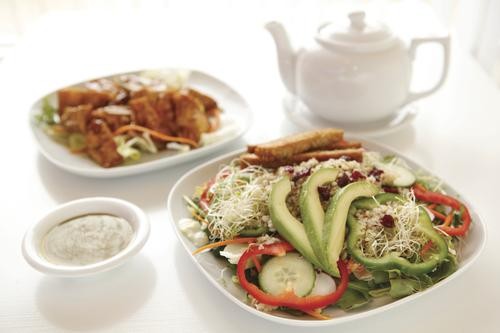 There's no question about it: Vegetarianism has become more mainstream in the past 15 years. Sure, some cuisines have always been vegetarian-friendly, and since the '60s, any tie-dyed college town worth its bookstore has boasted at least one exclusively vegetarian restaurant. But even these have gone from featuring virtuous yet bland bowls of veggies over brown rice to a diverse cuisine of internationally influenced dishes packed with so much flavor and texture that we've never missed the meat.

In traditional restaurants, too, vegetarian offerings have evolved from the ubiquitous plates of pasta primavera to thoughtfully conceived and well-prepared dishes, many of which sound at least as appealing as the non-vegetarian options.

But veganism, which eschews not only the consumption of meat but of all animal products, has always been a tougher sell. So maybe it's not surprising that Pittsburgh's newest -- and, as far as we know, only -- vegan restaurant is an unconventional case.

The adorably named Loving Hut in Robinson is part of an international chain run by Ching Hai -- or, as she prefers to be called, Supreme Master Ching Hai -- a self-described spiritual leader and entrepreneur. The serene, yet oddly lit, dining room is decorated with all-white furnishings from nearby IKEA and dominated by a large ceiling mural of the heart-spangled Loving Hut logo. The walls are covered with pro-vegan quotes from the Supreme Master ("Be veg/Go green/2 Save the planet!"). A couple of flat-screen TVs run a continuous feed of the Supreme Master's cable channel, complete with onscreen translations in 18 languages.

It was a weird setup to be sure. But the word on the street was that the food was great, and not just by vegan standards. It helps that the menu consists primarily of Vietnamese-inspired dishes, so that the lack of dairy isn't a glaring omission. As for the lack of meat, Loving Hut's approach features the preparation of traditional recipes with textured soy protein and other meat substitutes, instead of the creation of alternative dishes. The menu has been pared down since Loving Hut opened; a small section of Western-style foods has been reduced to a lonely veggie burger.

Our meal began with two styles of summer roll which differed widely in ingredients and appeal. The ones called fresh summer rolls combined a variety of textures (crunchy carrots, crisp jicama, tender soy ham and soft tofu) with juicy lettuce and peppery basil, all in a moist rice wrapper. The hoisin-peanut dipping sauce enhanced these flavors with its earthy sweetness, and we felt we were on our way to an excellent meal.

Until, that is, we tasted the Loving Hut special rolls. Vermicelli was a venerable inclusion, but the soy paste with salted bean curd added a dubious texture and unpleasant flavor, while the proportion of lettuce to filling was all wrong. Even with healthy scoops of the dipping sauce, these rolls were somewhere on the spectrum between bland and inedible.

We brightened with the delivery of Lucky Lemongrass, in which soy did a very convincing impression of a chicken breast. Better still, it was coated with a crispy "skin" infused with pungent lemongrass and piquant red pepper, giving it an assertive, distinctive flavor. This was served alongside a mound of brown rice and, oddly, a small salad of mixed greens without any dressing. The kitchen was happy to supply a lemon wedge upon request, but we were not sure which principle of veganism would require a diner to eat dry greens.

The BBQ Noodle was a close analogue of traditional rice vermicelli with grilled "meats," fresh greens, herbs and sprouts on top, and a side dish of mildly sweet sauce for unifying the disparate textures. The soy protein came in two varieties, chicken and beef, and again, the resemblance was uncanny. But the coating of sauce, intended to further the mimicry of basted, grilled meat, was too heavy, even grainy with spices. Mixed with the noodles and greens, it was edible, but short of really enjoyable. The optional crispy roll alongside also seemed off, the texture within a little too soft, the flavors indistinct.

The bun hue, a spicy noodle soup, was unfortunately the nadir of our meal. None of the meat substitutes, not even the more familiar ones of tofu and mushrooms, had a pleasant texture or flavor, and the broth itself was thin, oily and virtually flavorless. We think that the intended effect was spicy beef broth, but, while soy protein may make a reasonable facsimile of meat, it can't replicate the rich result of beef and bones that have boiled for hours. We wish that Loving Hut hadn't even tried.

We took refuge in tasty ginger tofu, firm triangles of bean curd in a light sauce that was savory yet punctuated with the zingy notes of fresh ginger. "Guru fried rice" offered the promise of curry powder, but there was an unaccountably large proportion of mushy corn, which overwhelmed this otherwise salutary dish.

Loving Hut is a place where vegan dietary restrictions will be not only understood, but celebrated, and where the best dishes have full flavors and robust textures. As omnivores, we admire Loving Hut's uncanny ability to replicate meat -- at least some of the time -- in its vegan recipes. But the rest of the time, we would have been more satisfied if the kitchen emphasized a greater diversity of vegetables instead of recipes traditionally centered around meat.