Lovebettie releases its bipolar debut, ... And We're Never Coming Back.

Lovebettie's debut album, ... And We're Never Coming Back, sounds like two distinct bands battling it out. Is this a Triple-A band that sometimes rocks, or a post-grunge alternative band with an expansive, sensitive underbelly?

Part of the sonic divergence comes from two songwriters taking turns at the mic: keyboardist Alexandra Naples, whose bluesy voice shines on the ballads, and guitarist C.T. Fields, who tends to chime in on the riffier songs. Supporting them are understated bassist Matt Sharrow and drummer J. Banks.

From my perspective, the more restrained material feels most natural. Particularly memorable is "Dirty Mary," the tale of a down-and-dirty femme fatale, in which Naples' voice soars and growls with a touch of Fiona Apple, and Fields lays down creepy tremolo guitar over the piano lines. "Blue Skied," also featuring Naples and her piano, is cleanly arranged and pleasantly understated. Fields also takes a more mellow turn on "Long Way Home," a mid-tempo pop-rocker that hearkens back to Matchbox 20.

With a fistful of catchy melodies, Lovebettie's lyrics skate under the radar, and seem consciously simple -- one song contains the lyrics, "I keep it honest / with a modest view / And I keep it obvious / why can't you?" The band also occasionally uses country-style punning in its angsty songs -- turning "sycamore" into "sick-amour," and "marionette" into "I've married the net of you," over a Soundgarden-style riff -- which is frankly silly.

The group may still be figuring out its sound, but if its rock-challenge ancestors Brownie Mary and The Cool Grand are any indication, Lovebettie should have no problem attracting an audience here, with a shot in the wide world. And the awesomely triumphant power ballad "Worst of Me" is exactly the sort of song a Nashville songstress could ride to the top of the charts -- seriously, they should sell it to Faith Hill and get big and rich. 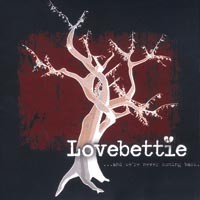