This season’s first Christmas movie — Love the Coopers — begins with the sound of sleigh bells and ends with a woof. Not an actual dog barking, but a man, in this case Steve Martin, supplying the voice of the family dog, Rags. “Woof.”

Rags narrates the film, and he’s seen too many Christmases. We know this because he offers flashback insights from decades ago, and try as he might to keep it on the positive tip, Rags is the first to blurt out all the problems — many of them recurring — that the Cooper family is having. (Also alarming: Rags talks about eating his own pain in third person.) 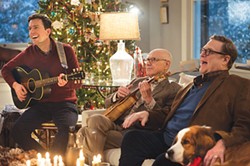 Jessie Nelson’s comedy-with-a-message is about as formulaic as they come. A sprawling cast — four generations of Coopers and associates — is introduced. Each person has a problem, and by the end of the film, everything has been patched up. (The entire film takes place on Christmas Eve, so this is some speedy getting-one’s-life-in-order!)

Alpha marrieds (Diane Keaton and John Goodman) are splitting up; their son (Ed Helms) is already divorced (and jobless!), and their daughter (Olivia Wilde) is hiding at an airport bar with a soldier (Jake Lacy). Grandpa (Alan Arkin) is lonely, except for his waitress buddy (Amanda Seyfried), who is also bummed out. The spinster aunt (Marisa Tomei) is getting hauled to jail for shoplifting by a robot-like cop (Anthony Mackie). Even the little kids are stressing out. The only carefree person is Aunt Fishy (June Squibb), who has dementia, but the “fun” movie kind where she’s amusingly confused about time and helps herself to the gingerbread-house display at the supermarket.

There are plenty of old pros in the cast, who do what they can with the hackneyed material, though nobody strays far from their established bankable personas: Helms is a sadsack, Seyfried is winsome, Goodman is a cheery trouper, and so on. Wilde and Lacy have the liveliest banter, if the second most-contrived plot: He’s a Republican shipping out to war, she’s a failed playwright afraid to love. But even their piffle of a mini rom-com can’t find the balance between light and grim. (You already knew that the cop and the shoplifter sharing a ride is the most contrived plot.)

Love the Coopers was filmed in Pittsburgh, though the film never really owns the town, aiming for a generic snowy city vibe. For the amusement of the locals, there is a long, magical ride on the T that defies space and time. But that’s just the kind of detail a dog telling a story is apt to get wrong.