Everything is great, but Simon would rather not come out as gay just yet 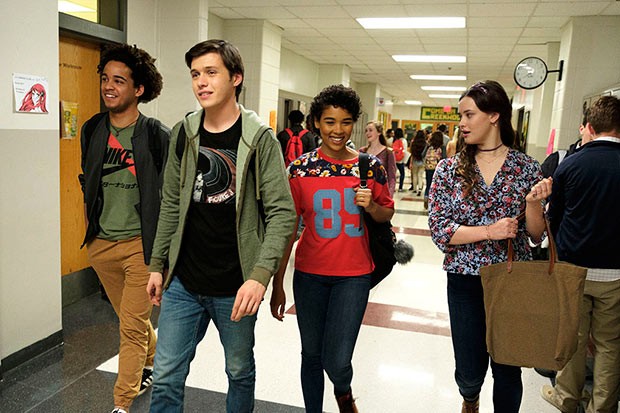 For years, the coming-out film was a staple of the gay-film-festival circuit. Some were dramas, but many were comedies that mined the awkwardness of telling friends and family for knowing laughs. Everybody’s story is different, but as with any of life’s passages, there are universal elements.

And now a coming-out comedy is hitting the multiplexes everywhere and, in its sweetly feel-good and largely uncritical manner, hoping to resonate with everyone. Love, Simon, adapted from Becky Albertalli’s novel, Simon vs. the Homo Sapiens Agenda, isn’t much of a departure from other sunny high-school-plus-a-manageable-situation films that Hollywood churns out. But we nonetheless note its arrival: Boys are kissing boys in mainstream movies now.

Simon (Nick Robinson, Everything, Everything) assures us upfront that he’s a normal kid, just like us. Well, not like all of us, but he’s typical by movies standards: white, male, nice-looking, comfortable suburban middle-class, caring parents (Josh Duhamel, Jennifer Garner) and comfortably set up in high school with a supportive crew of friends. But his “big secret” is that he’s gay, and he’s not sure when or how to tell people.

Turns out he’s not the only one. Through a post-your-secrets type of school blog, Simon discovers that another guy at his school is also gay-but-not-yet-out. Adopting an anonymous email handle, Simon and this other fellow, a.k.a. “Blue,” begin a correspondence that grows from merely supportive to increasingly heartfelt. Then Simon tries to figure out which guy in school Blue might be, while we wait for the inevitable blow-up that comes from sharing secrets on the not-very-secure internet.

It’s an engaging enough film that even a person long out of high school like myself found it amusing. Some of the funniest parts are asides, such as those depicting what it would be like if kids had to come out as straight, or Simon’s idea of what it might mean to be gay in college. And both the school’s featured adults — Tony Hale, as the motormouth vice principal, and Natasha Rothwell, as the exasperated drama teacher — are great.

The assorted bromides about love and being yourself and friendship and so on are perfunctory, but they have to be included; this is a relatively safe film, where things work out just fine. The resolution of the romance is as deliciously phony-baloney romantic as some Doris Day pic, but I guess that’s why we go to the movies.