The characters are small, dull and whiny, with lives as unimportant as they are uninteresting 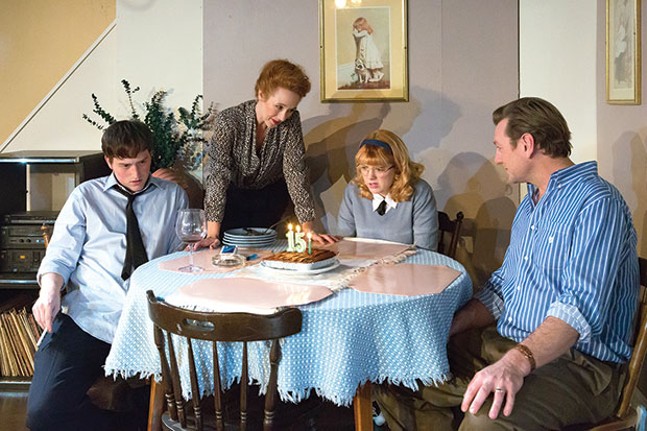 In what must be classified as a most brazen bit of holiday-season counterprogramming, Kinetic Theatre Co. presents the regional premiere of Mike Bartlett’s corrosive 2011 comedy Love, Love, Love. Believe me, there aren’t coal mountains in West Virginia big enough to produce the lumps so richly deserved by the characters in this play.

In 1967, in a grubby flat somewhere in London, we meet up with a very uptight young man (Henry) just barely tolerating his layabout, wastrel squatter of a brother, Kenneth. On this evening, his desire to get rid of Kenneth is even more urgent than usual, as he’s got a bird (Sandra) coming around and hopes of, at least, some snogging. Kenneth being who he is (and plays being what they are), the prodigal doesn’t leave but, instead, stays to romance Sandra, leaving Henry, literally, out in the cold.

In the next scene we meet up with Ken and Sandy some 20 years later. They’ve since married and produced two children now in their mid-teens, Jamie and Rosie. All four hate each other like poison and there’s a good deal of swearing, drinking and smoking going on, and you just know that nothing good’s going to come of any of it.

And it doesn’t when, in the last scene, we find the four 20 years hence. Things have gone from pot to worse, with the now middle-aged children treating their parents as horribly as the parents treated them when they were middle-aged.

Andrew Paul directs this Kinetic Theatre production like a house afire — thankfully — and his four-person cast play with a teeth-rattling urgency. Darren Weller and Mindy Woodhead, as Ken and Sandra, are almost hideously beautiful luxuriating in their own nauseating selfishness. These are fearless performances played without ego. Ethan Saks and Aviana Glover are the wounded and then wounding children, with a choking rage and an ancient hurt just throbbing below the surface. This production, with Paul’s direction, zooms by like an ambulance transporting a shooting victim.

But to what end I couldn’t tell you. I’m not one of these people who needs to “like” the characters in a play. They don’t have to be nice or kind or good to hold my attention — interesting and original is what I’m after with, as a bonus, wit. But the characters in Love, Love, Love are none of those things. They’re small, dull and whiny, with lives as unimportant as they are uninteresting. Their problems are completely self-manufactured, and Bartlett’s attempts at meaning and insight are trite at best and clichéd at worst. Watching all of this on parade makes for a very tedious two hours.

What made Bartlett think the world was crying out for yet another dysfunctional-family drama is anyone’s guess. And why any theater company would want to produce it, like the silence of God, passeth all understanding.

And to all a good night.