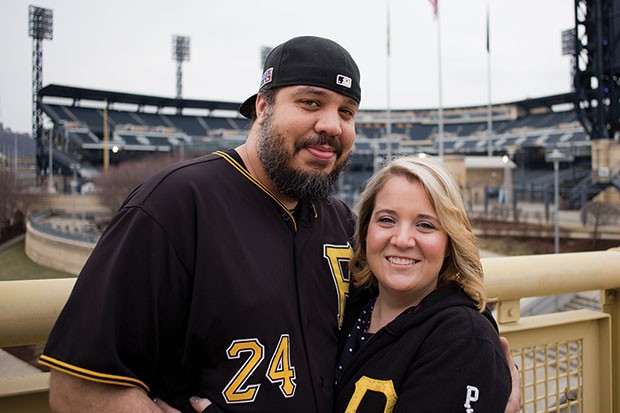 Most people know Demitrius Thorn from his resemblance to former Pittsburgh Pirates third baseman Pedro Alvarez. Donning a No. 24 jersey, baseball pants and a cap, the 39-year-old spent many a game in section 26 of PNC Park, catching the eyes of fans, cameras and Alvarez himself, who stood mere feet away. In the spring of 2016, however, Alvarez moved on to the Baltimore Orioles; following suit, Thorn hung up his jersey, retiring as “Fake Pedro.”

Thorn is returning to section 26 once again on April 8, but not solely for baseball; he and his fiancée, Dana Greenewald, are getting married there.

“We asked ourselves, ‘What is the simplest thing to do?’” she says. Both Greenewald and Thorn have been previously married, and streamlining the ceremony was their priority. As Thorn put it, they didn’t want any “pomp and circumstance.”

“We didn’t want a huge production,” Greenewald says. “Getting dressed up and going down to the courthouse — even that seems daunting.”

Greenewald discovered that the easiest option for them was the Quaker tradition of a self-uniting ceremony, a legal marriage in Pennsylvania where two people can get married anywhere, as long as they have two witnesses. Thorn is hoping that one of those witnesses will be 99-year-old Pirates usher Phil Coyne.

“She told me that we should probably do it inside the park,” Thorn says. “We were originally actually going to do it in her living room. It’s going to be an interesting day.”

This suggestion came as a surprise to Thorn, seeing as Greenewald isn’t the biggest sports fan. “Her parents are big baseball fans, but she’s not,” he says.

“How am I going to marry this guy who is a baseball fanatic?” she says. “I absolutely loathe sports, and I still do, but his enthusiasm for it is infectious. I still know absolutely nothing about the sport. I learned maybe three words from baseball in the last year, and I still ask, ‘Am I supposed to clap now?’”

But, of course, compromise is a two-way street in Greenewald and Thorn’s relationship. While she is learning the rules of baseball and how to play MLB The Show 17, he is learning how to garden and to cook food that’s a little more difficult to make than macaroni and cheese.

The two met while working together at Best Buy, and after about a year of friendship, they began dating, and it didn’t take long for the two to realize that they were committed to one another.

“I think that we’re kind of perfect for each other,” Thorn says. “Once we started dating, she kind of knew from the beginning that we would be together, and as time went on, I was like, ‘I’m going to marry that lady.’”

“It’s one of those things that our personalities are so similar,” Greenewald says. “We got along way too well.”

Thorn’s mother passed away in September 2015. She had brought him to his first baseball game at the age of 12, and once his obsession for the sport developed, the two always attended games together. With his mother absent, Thorn didn’t go to quite as many Pirates games in the 2016 season, but his passion for his team and the sport remains.

“You feel like your mom’s watching you sitting there,” Thorn says. “The view from there is perfect. Everything is just perfect.”

And so on Sat., April 8, Greenewald and Thorn will come as an engaged couple to section 26 of PNC Park. And that evening, they will stay to watch the Pirates face the Atlanta Braves as season-ticket-holders, and husband and wife.lud