CP photo: Ryan Deto
State rep. candidate Danny DeVito in front of the City-County Building on Fri., Nov. 6, 2020
Today, after presidential candidate Joe Biden overtook President Donald Trump in the Pennsylvania vote count, some far-right personalities and candidates made baseless and false claims that mail-in votes being counted are illegal. And one of those right wingers in Pittsburgh is state Rep. candidate Danny DeVito (R-Carnegie). DeVito, who currently is trailing in his election and is almost certain to lose, gathered with about 30 other protesters in front of Pittsburgh’s City-County Building.

Some protesters were holding “Stop the Steal” signs. “We will never accept Joe Biden as a legitimate president," DeVito told the small crowd.

“We will never accept Joe Biden as a legitimate president” pic.twitter.com/6hs9SS1ro4

After about 10 minutes, a dozen or so of the protesters left the scene and didn’t return. DeVito then claimed, without evidence, that there was voter fraud in Coraopolis. His claims are not in line with the Republican Party of Allegheny County.

County party chair Sam DeMarco said on Nov. 4 that Allegheny County has “done a tremendous job under incredible circumstances” and added that there have been no security concerns with the ballot count. While Biden has done very well in Allegheny County, so have many Republicans down ballot.

According to the Associated Press, a Pennsylvania appellate court judge has dismissed a request from Republicans to stop the state or counties from counting provisional ballots that were cast by voters whose mail-in ballots were disqualified by a technicality. 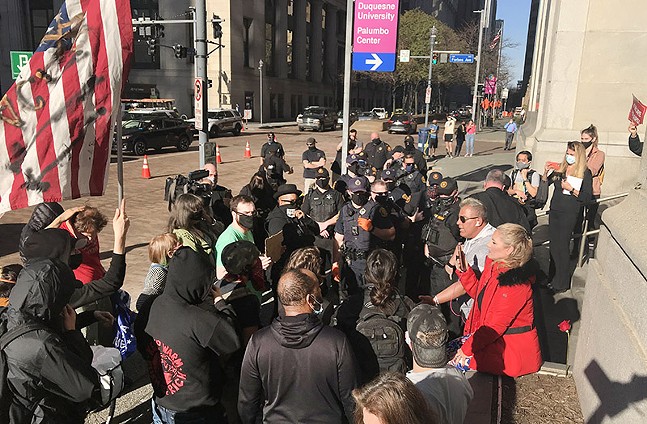 After several minutes, dozens of Pittsburgh police officers in riot gear showed up and forced themselves in between the two groups of protesters. Eventually, police outnumbered protesters at least three to one.

DeVito left shortly after police arrived on the scene.


After 15 minutes of opposing sides yelling at each other, police in riot gear get in-between and then force out everyone from sidewalk. Counter protesters in street. Pro-trump crowd in portico. DeVito left before this happened. pic.twitter.com/Ig5KEzXTjZ

The whole event lasted about 90 minutes.