Groupies follow bands; foodies follow chefs. Anyone who's ever watched the Food Network knows that restaurants don't make great chefs, but that the opposite is true. In this regard, Jose Lemus is a rock star. In a region where outstanding Mexican food is about as rare as a World Series win, the meals Lemus created at Azul in Leetsdale (of all places) were so memorable, as soon as we heard he was firing the burners at his own restaurant, we jumped in the car.

We arrived at some unlikely coordinates. Like Azul, Los Chiludos resides in an old brick building on a mostly residential street of a town -- Canonsburg, in this case -- not exactly renowned for its ethnic cuisine. But the Aztec-themed stained glass above the storefront windows let us know we were entering a zone where Mexican cuisine is taken seriously. The interior features original tin ceilings and an open kitchen fronted by a counter. Service is café-style: You order at the counter and get your own drinks (in Styrofoam cups, regrettably), then seat yourself and wait for your order to be delivered to your table.

From the outdoor seating on the back porch, we surveyed the neighbors' backyards and the menu. Los Chiludos' offerings are mostly classic Mexican-American -- tacos, burritos and enchiladas -- sprinkled with more authentic options such as tinga (saucy stewed pork) and sopes, thick cornmeal cakes which resemble something between a tortilla and a biscuit.

We focused on these less-familiar items, but made sure to try Los Chiludos' signature burrito. Approximately the size of Popeye's biceps, this massive wrap provided us with no fewer than three meals over the course of the two days it was with us. Unfortunately, in every regard except for size, it was the least impressive item we tried. Stuffed mostly with wet Mexican rice, it lacked the lively, fresh combination of meaty, vegetal and dairy flavors of the best burritos we've had. If we try the burrito again, we'll ask for it chilango style, which adds grilled peppers and onions as well as "spicy crema salsa."

Burrito aside, however, Los Chiludos excels with Americanized Mexican dishes, imbuing them with authentic ingredients and preparations which make the difference between Mexican-inspired fast food and fresh, flavorful food as it's prepared in Mexico. The chicken taquitos were a good example: The corn tortilla retained its character, and the shredded chicken within was flavorful, moist and tender. The same chicken also made an appearance in a satisfying enchilada verde that was covered, like many of Los Chiludos' dishes, in shredded queso fresco.

Things really started to heat up with the sopes, topped, like an open-face sandwich on steroids, with a veritable mountain of chorizo, beans, sour cream, shredded lettuce and more queso fresco. The assertively spicy chorizo was nicely buffered by the mild sopes, which was slightly crisp and flaky on the edges but otherwise dense, with a polenta-like moistness, within. The beans, lettuce, cheese and sour cream rounded out the dish's successful basic contrast of sausage and sopes, and all the ingredients were well proportioned, so that we were able to enjoy their intermingled flavors in each bite.

The tinga tostada featured a similar wealth of toppings, this time atop a mere fried tortilla. But it was an excellent, fresh corn tortilla, and it was up to the job: Even under all of those ingredients, its crispness and quality shone through. The tinga itself, however, lacked the intensity we associate with this distinctly Mexican pork preparation. Its slightly washed-out flavor reminded us why pork is called "the other white meat."

The carnitas taco, however, issued a swift correction to any initial doubts about Los Chiludos' relationship to pork. Clearly made from pork shoulder or a similarly fatty cut, the carnitas was incredibly moist, rich and downright good. Befitting an authentic taqueria, Los Chiludos doubles the corn tortillas around its tacos. This not only serves to pair a significant amount of corn flavor with the fillings, it also helps to contain the generous portions.

Finally, that Cal-Mex favorite, the fish taco, left us ultimately satisfied. Chef Lemus uses breaded cod, which gave us a moment's pause. But the crisp exterior, flecked with herbs, was plenty flavorful, while the flesh within, tender but not delicate, allowed the shredded cabbage and zingy Dijon-chipotle sauce to claim their rightful places.

Los Chiludos reminds us that, where food is concerned, perfect authenticity can be a false ideal. What matters most is execution, and Lemus has shown that even assimilated Mexican-American fare can be flavorful, exciting and well worth the long trip. 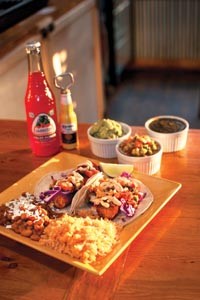