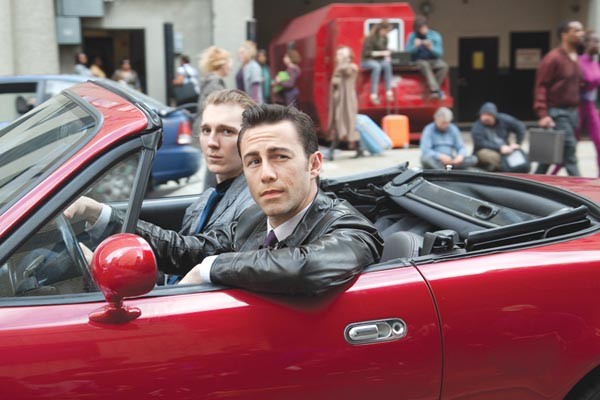 This ride goes back to the future: Joseph Gordon-Levitt

Life choices, already tricky, are made more complicated by time travel in Rian Johnson's sci-fi actioner Looper. In 2044, Joe (Joseph Gordon-Levitt) is a thirty-something guy working as a "looper," an assassin in Kansas whose work comes from 2074. There, gangsters using forbidden time-travel machines zap victims back to 2044, where Joe kills and disposes of them. All fine, until sixty-something Joe (Bruce Willis) turns up in 2044. Loopers "retire" by killing their elderly selves, who bring 30 years' worth of retirement money from the future, but Old Joe has his own fix-the-past/cure-the-future plan: finding the boy who will become his late-in-life tormentor.

It sounds complicated, but it's easy to follow as it unfolds, and it's loads of fun to watch. Seeing Willis dress down his younger self about the complications of time travel is a nice meta joke, and Looper has a vein of dark humor.

There are some high-speed chases and kicky violence, but Looper also tickles the old noggin. Ideally, Old and Young Joe should be allies, but the inescapable-yet-quirky logic of time travel means their agendas diverge. Young Joe, still a bit dewy, will do anything to ensure his future, as yet unwritten, while his older self would kill a child to protect his past, aspects of which he treasures. It seems irresolvable, yet human nature may yet best the loopiness of time travel.