Looking back at the Pittsburgh region's role in the Vietnam War 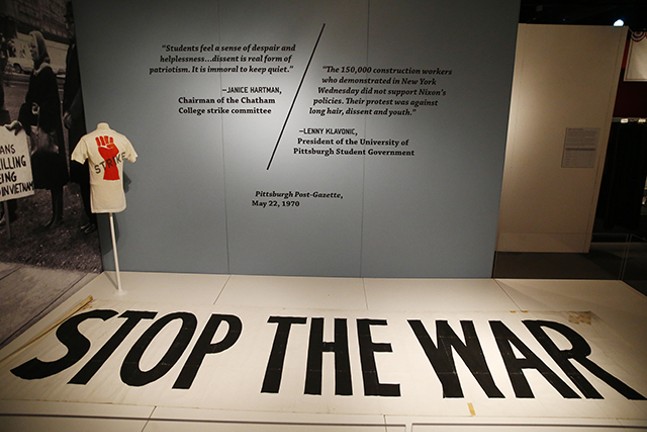 Pennsylvania is home to more than 296,000 Vietnam War veterans, and the Southwestern region in particular played an important role in opposing, supporting, documenting, and prolonging the conflict between North and South Vietnamese. Whether it was groups providing aid and entertainment to American soldiers, protesting the government's involvement, or fighting on the front lines, Pittsburgh's role with the Vietnam War was diverse and complicated.

The Heinz History Center’s exhibit The Vietnam War: 1945-1975 takes a deep dive back into the conflict, both on the national scale and locally. The exhibit is on display now and serves as a Memorial Day reminder that honoring armed services members goes beyond celebrating their victories and sacrifices.

“This exhibit tells the deeply personal stories of the men and women who were impacted by the Vietnam War, from the home front to the front lines,” says Samuel Black, African American Program director at the History Center and the lead curator of the Vietnam War exhibit. “We examine Western Pennsylvania’s role and impact on the war and feature the stories of Pittsburghers who fought in the war, served in support services, were conscientious objectors, and participated in political protests and humanitarian initiatives during and after the war.”

The timeline begins in the aftermath of World War II. With the allied powers splitting up responsibilities of the losing countries and their conquered territories, two political ideologies started to come to a head. The U.S. wanted to spread its capitalistic, democratic system, and the Soviet Union wanted to spread communism.

As so, a strong anti-communist movement grew in the U.S. The Heinz exhibit details President Harry Truman’s anti-communism efforts in Asia post WWII, which teed up America’s involvement in Vietnam. President Dwight Eisenhower sent U.S. troops into the war in 1955 and each successive administration escalated U.S. involvement in Vietnam, parlaying the threat of communism as justification.

The exhibit showcases the gear and uniforms of Pittsburgh-based soldiers like Glenn Mahone, John Clark, and the well-known Pittsburgh Steeler Rocky Bleier. Museum-goers can attempt to lift up a 70-pound rucksack commonly carried by U.S. soldiers. There's also a room designed to emulate the typical 1960s living room, showcasing how the American public was viewing the war through media. It includes a TV showing newsreel footage of the war, as well as a 1966 Chatham College commencement speech given by Robert McNamara, the secretary of defense under President John F. Kennedy.

This speech not only highlights the evolving opposition to the war, as McNamara references the ongoing protests undertaken by Chatham students, but also the federal government's consistency in belittling the grassroots movements of young Americans.

McNamara says he respected the rights of the students to organize, but he criticizes the efforts and calls them “extremist protests” in his speech.

Even with the growing opposition to the conflict, Pittsburgh never ignored the roles of individuals. Donna Giordani of Westmoreland County is highlighted as the first woman in position with the 1st Aviation Brigade. She earned a Bronze Star and went on to become part of the first integrated class of Pittsburgh Police officers in 1976. Aid efforts from New Kensington residents are also displayed.

CP photo: Jared Wickerham
A woman looks at the names of 743 western Pennsylvanians killed in the Vietnam War.

The growing fatigue and disillusionment with the war are chronicled as the exhibit goes on.  In 1972 a large Stop the War banner was unveiled during the Pirates Opening Day at Three Rivers Stadium. Washington & Jefferson College in Washington County helped anti-war protests. Anti-war sentiment started to combine with the Civil Rights movement of that era, and the Heinz exhibit shows how that splintered folks in Southwestern Pennsylvania. Union leaders joined anti-war and civil rights protests, but the exhibit notes how few white, working-class union members followed suit.

The exhibit hints at how this realignment of white-working class, labor-affiliated voters might have shifted following the 1968 election. In 1972, President Richard Nixon, who historians note used race to appeal to white voters, easily won Pennsylvania and flipped Allegheny County and several other Southwestern Pennsylvania counties.

Black says it was important to note America’s and Pittsburgh’s conflicted views on race and freedom during the Vietnam War.

“The Vietnam War came at a time when America and the world were challenged with upholding the reigns of freedom,” says Black. “The Vietnam War exposed America’s confusion and hypocrisy about freedom at a time when it was denying freedom to its own Black and Brown citizens. It was important to show that a complex war had such a great impact on who we are as Americans and what we think as a democratic society.”

In the end, the exhibit showcases the Pittsburgh region's strong desire to memorialize veterans and fallen soldiers. It’s noted that McKeesport was the first city in America to create a wall to honor local soldiers who died in the war. The final room of the exhibit is complete with a wall listing 752 of Southwestern Pennsylvania fallen soldiers from Vietnam.