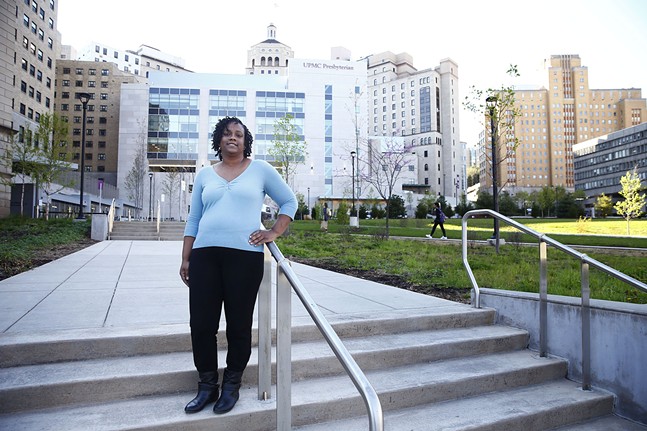 CP photo: Jared Wickerham
Nila Payton
Nila Payton isn’t afraid to share her voice in the fight for workers’ rights. On April 14, she stood in front of thousands at a rally in Oakland for presidential candidate Bernie Sanders and spoke about her and her co-workers battle to get UPMC to raise their minimum wage and allow workers to unionize. She had grown frustrated with just scraping by, even though she works for the largest employer and one of the richest entities in the region.

Specifically, Payton was upset with how UPMC locked employees into what she described as unfair UPMC health insurance plans. Her passionate plea drew roaring applause from the crowd.

“Many of my coworkers, none of which make a living, let alone thriving wage, are also in debt to UPMC, due to skyrocketing health-care prices and predatory clauses in their insurance,” said Payton.

Before 2015, Payton was like most American workers. Put in her hours, performed her job, and then returned home to raise her children with her husband.

But in 2015, she started noticing how co-workers were building momentum in organizing a union. She realized she was just like them. She wasn’t making enough to support her family. She was struggling to make ends meet, saddled by medical debt her own employer was accruing against her. She spoke in front of the wage review board, and a fire was lit.

“Once I found out my rights, I was a like a steaming locomotive,” says Payton.

For the last four years, Payton has lent her voice to the movement for higher wages and the right to form a union at UPMC. She’s spoken publicly, rallied support, and become a face of the movement.

Payton is part of a long Pittsburgh tradition of workers demanding their employers treat them fairly and improve working conditions. Steelworkers in Homestead demanded this in the 1890s; hospital workers are demanding now. As International Workers’ Day approaches, aka May Day, Payton serves as a reminder of that long and storied history of American labor.

Payton has worked as an administrative assistant at UPMC Presbyterian for 13 years. She is 38 years old and has three children (one full-grown and others age 5 and 2). She lives with her husband and her two youngest kids in East Hills.

Even though she has worked at UPMC long enough to earn just above $15 an hour, Payton says it barely scratches the surface to provide for a good quality of life for her and her family. She is the breadwinner and says she and her husband have decided it makes more fiscal sense for him to take care of the kids.

Payton says she would love to take her kids to UPMC Presbyterian child care so her husband can work, but the cost is even greater than what her husband would likely earn, defeating the purpose.

“It would be great if life was just a little bit easier,” says Payton. “If they could make that wage happen, and maybe help out with childcare so my husband can work, that would make a big difference.”

Even with her salary, she and her family have to make hard choices. Between rent, diapers, food, a bus pass, and medical expenses, Payton is still able to save, but not much. It may seem small, but it makes a difference between things middle-class families might take for granted.

“For a family of four to go to the zoo, that is $60, and then thinking about the food. It cost $8 for a hot dog,” says Payton, tallying up the expenses in her mind. “We want to have fun as a family, and Chuck E. Cheese is one of the only places we can afford on a regular basis.”

Payton’s struggles are not isolated. The University of Pittsburgh is in the midst of completing a wage study of Pittsburgh workers. Sociologist Jeffrey Shook says the study compiled information from hundreds of hospital workers in Pittsburgh, and the consensus was even those making $15-18 an hour face many financial hardships.

“I think getting to $15 is good as it gets towards the goal of improving well-being, but it is not where we need to be,” says Shook.

According to the Pittsburgh Post-Gazette, seven executives at UPMC each brought in more than $2 million in salaries and benefits in 2016. UPMC president Jeffrey Romoff brought in just under $7 million.

Tough choices for UPMC employees are only compounded by medical bills. Payton had gallbladder surgery at UPMC Montefiore, and recently took her son to the emergency room after he busted his lip. She says UPMC workers have inadequate UPMC health insurance, with high co-pays and deductibles. Payton says many UPMC workers are in thousands of dollars of medical debt to their own employer.

“No one should have to worry about taking their kids or themselves to hospital,” says Payton.

All of these reasons have moved Payton to become more involved in the labor fight, and now she is joining the political movement. She not only spoke at the Sanders rally, she also supports his candidacy for president because she trusts he will look out for workers like her. “I honestly think Bernie would be the one to help us,” she says.

Payton says her situation could be better, but recognizes it is even worse for those making less than $15 an hour. UPMC plans to raise its minimum wage to $15 an hour in 2021, but Payton says the workers need that raise now. And she says a union is necessary.