"We have taken longish breaks along the way, which I think probably helps." 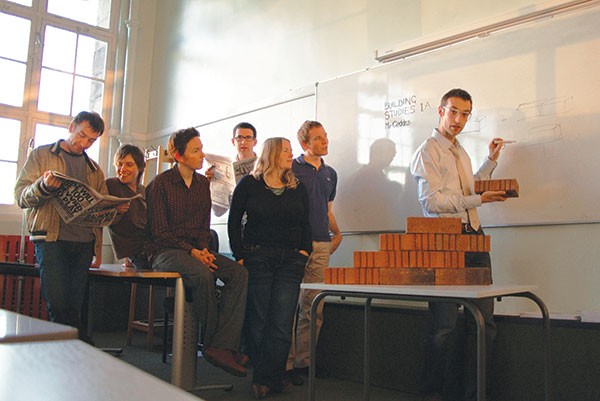 On and off again: Belle and Sebastian

The Andy Warhol Museum presents BELLE AND SEBASTIAN with YO LA TENGO.

Glaswegian indie outfit Belle and Sebastian has had a rather productive run since its inception 17 years ago. Gold records, a devout fanbase, numerous tours that brought the band to this country — not bad for a group that cloaked itself in anonymity for the first few years. But lately, founder Stuart Murdoch has immersed himself in finishing his film God Help the Girl — a semi-autobiographical story about kids who overcome a difficult period of their lives by making music. As a result, the band hasn't released anything since 2010's Belle and Sebastian Write About Love.

Granted, a disc of B-sides and remixes (The Third Eye Centre) should be here by the time you read this, but one would think the rest of the band is getting restless.

"Ehhh — maybe a little bit," says keyboardist Chris Geddes, his voice rising almost an octave, as he replies. "You can't really begrudge [Murdoch] doing things outside the band, because it's his vision that brought the band together in the first place. His songs are what kind of give the band the longevity it's had. So it would be fairly petty to really begrudge him doing something outside."

Geddes, who has been with the band since its debut album, Tigermilk, also realizes that the occasional hiatus keeps the band members fresh for when they do reconvene. "We have taken longish breaks along the way, which I think probably helps," he says, on the phone from Glasgow. "Also, a lot of the bands that can be seen as our contemporaries ... have re-formed already, like Pavement and Pulp. They're on their second time out already. So we've still got that to look forward to as well."

Lately the band has been preparing for its upcoming U.S. tour, assembling a set list that spans its whole catalog, and possibly sticking in a few new songs, something it's never done before. Plans are underway to work on a new album once the tour ends. The return to the U.S., including the band's first appearance in Pittsburgh, feels a bit like a homecoming, Geddes says. It's recorded a few albums on our shores and, more significantly, he says that people have always connected with the music, despite the focus on protagonists in their native city.

If You're Feeling Sinister, the band's sophomore album, was actually the first to hit the United States, since Tigermilk was initially released at home on a smaller label. The band became an immediate hit with college radio, whose denizens embraced its brand of understated pop. Stuart Murdoch's plaintive voice sung elaborate tales that often contrasted darker stories with the bright melodies, making the whole thing sound like a blend of Morrissey's outlook and Burt Bacharach's arrangements. Moody British pop band Felt, which was together in the '80s, also serves as a sure, albeit obscure, influence.

Singer/guitarist Murdoch had been sick with myalgic encephalomyelitis, a disease similar to chronic-fatigue syndrome, before he started the band. That seemed to temper his outlook and his delivery, which he admitted in Magnet in 2006. It also contributed to the way the band presented itself, hiding behind fictional stories in the liner notes of those releases, and not listing band personnel.

Geddes says the band's success came slowly, which was fine with the musicians. "Stuart was just kind of recovering from M.E. and his health was quite fragile," he says. "So I think it suited him quite well for things to happen gradually. I don't know if he would have been physically able to really go for it early on in terms of touring and promoting and stuff. So it suited everyone to keep things low-key. I think the combination of [that] and band members, myself included, being quite young — maybe not mentally ready for pressure — in the long run, it worked out for the band."

The first few albums were Murdoch's vision, but other band members have gradually started to step in and contribute. Stevie Jackson (guitar) and Sarah Martin (keyboards, violin) often share singing duties with Murdoch. "We work pretty collectively these days," Geddes says. "It's been open to other people to contribute, whether it's actually bringing finished songs to the band or [working on] arrangements of music. It varies from one song to another. But quite often these days the songwriters will bring in things, ideas, not fully formed as they used to be, and we'll work on them as a band."

When vocalist/cellist Isobel Campbell left in 2001, the band lost Murdoch's visual and vocal foil. This coincided with a shift in sound and the tone of the lyrics, but no one was looking back. "We lost a lot of the original fans when I stopped being miserable," Murdoch told the New York Times in 2009. "But the only thing worse than being miserable is sentimentalizing misery as a desired state." Today the band remains a strong unit capable of breaking hearts with lyrics and musical hooks — or both.

Further, the band has seen greater success with its last few albums, and the more guarded Murdoch is receptive to enthusiastic fans, according to his band mate. "Music means a lot to him as well, so if his music has a part in someone else's life and someone wants to come up and tell him that, than he's certainly cool with it," Geddes says.