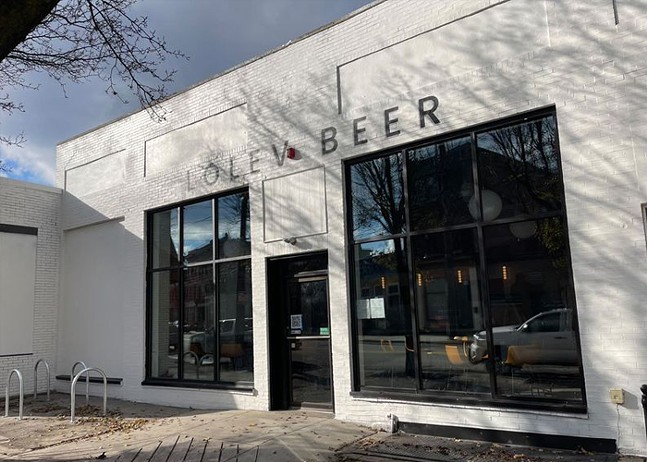 Photo: Courtesy of Lolev Beer
Lolev Beer
Lawrenceville has been a haven for good times in Pittsburgh for years. Along with stand-out restaurants, clubs, and bars, it also has a growing craft beer scene, and Lolev Beer is the latest addition.

Opening on Dec. 2, Lolev Beer will bring a modern taproom experience and years of brewing experience to the neighborhood's bustling Butler Street.

Started by Ted Slesinski and his brother, Scott, the space has taken on many forms throughout the years, with a brewery only being the latest transformation. “It’s been a Ford Dealership for 50 years, it’s been a beer distributor, it’s been a mechanic, a daycare, and a gym," Ted Slesinski tells Pittsburgh City Paper.

This is surprising, as the warm, inviting taproom feels like it’s always been in its current form. The space features all neon lighting, lounge chairs, and an upscale cafeteria-style main room.

“We really do have a unique space, especially our lounge area, and we’d like to utilize that for events, whether it being a private space or live music and things like that,” says Slesinski. “But really we want to see how people want to use the space. We’re still getting acquainted with the community here, and that’s driven a lot of our decision-making thus far.”

Photo: Courtesy of Lolev Beer
Lolev Beer taproom
From the beer perspective, Lolev is the culmination of about a decade of work and build-up. From homebrewing for 11 years in Philadelphia to Scott working at Braeloch Brewing in Chester County, Pa., this marks their chance to leave an imprint of their own on the Pittsburgh scene.

“We’re not focusing on any specific style, but generally, what we’d like to do is iterate each style enough that we think it’s distinct, and we have our own version of each kind of beer that we make,” says Slesinski.

To start, their draft list will include Array, a light and juicy Pale Ale; Tides, a 6.9% American IPA; Scylla, a 10.5% Imperial Stout; and Revive, a unique and initially popular Hard Seltzer variant. The 20-barrel brewing system will allow for a lot more beer as Lolev continues to move forward and expand its consumer base.

For now, though, Lolev offers four taps, guest food trucks like Stunt Pig and Haskel’s, and an atmosphere that will keep you coming back.
Lolev Beer. Opens Dec. 2. 5247 Butler St., Lawrenceville. lolev.beer