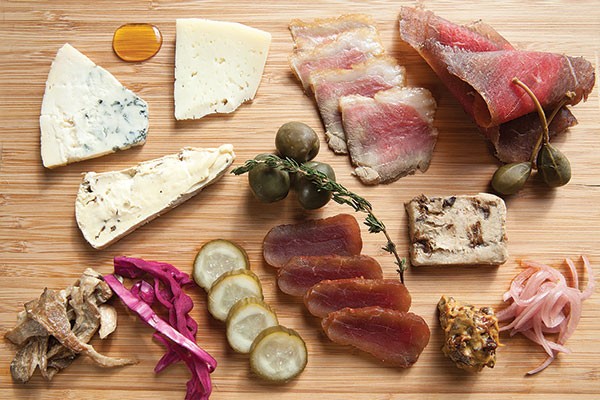 It's the holy grail of dining: the neighborhood bistro with an atmosphere you'd like to experience every night, and food good enough to do the same.

Lola Bistro, in a sweet little space at the corner of Western Avenue and Galveston Street, isn't in our neighborhood. But we felt at home the moment we entered, thanks to cozy lighting, an appealing display of original paintings on the walls and a jazz soundtrack that was not too hot and not too cool. Adding to the homey feel was a kitchen that was open, not through a well-lit aperture or showy chef's table, but via the simple expedient of wide-open doors. This casual connectivity of dining room and kitchen afforded an intimate view of chef Michael Barnhouse in his element, carefully assembling dishes just so.

And what went on in that kitchen was most enticing. The menu calls it "contemporary comfort cuisine," and we found that a pretty apt description of a selection that hews to the familiar — meat and fish, pot pie, pasta Bolognese — while applying up-to-the-minute sensibilities to the details: house-cured meats, infused oils, coconut milk in the Moroccan vegetable stew.

Jason always welcomes the promise of pelmeni, the Russian dumpling somewhere between a pierogi and gyoza, but he's never had a really good one — until now. Barnhouse's wife (who also serves as front-of-house manager and pastry chef) is herself Siberian, and her pelmeni were superb. They offered a thick, tender dough wrapped around a moist, richly flavored filling of ground beef and lamb. A drizzle of dill sour cream and white-wine vinegar enlivened the hearty plate and anointed a rapidly disappearing appetizer.

Apple-cider-braised rabbit on bruschetta resembled pulled pork on a thick slab of toast that got a touch soggy in the middle. Prune mustard sounded grandmotherly but tasted just grand, the hint of sweetness in the zesty Dijon a good match for the rich, dark meat.

Lime Caesar salad was the perfect combination of creamy, crispy and bright, while a lomo and mushroom salad dressed up tender greens with an unusual and successful trio of star ingredients. Lomo, cured pork loin that's prepared a bit like gravlax, contributed a salty-savory flavor and a silken yet chewy texture. The texture was a near-match for that of sautéed and marinated oyster mushrooms. Though the salad's earthy flavor profile was distinctive, both the mushrooms and the lomo provided it with deep umami character. Hazelnut oil and crushed hazelnuts rounded out the flavor, and the crunch of the nuts contrasted well with the succulence of the mushrooms and pork.

Angelique vacillated between the Moroccan vegetable stew, with garbanzos in a tomato-hazelnut base served over Israeli couscous, and the decidedly un-vegetarian lamb Bolognese, made with orange-infused Castelvetrano olive oil and served over house-made fettucini. Ms. Barnhouse's testimony that the Bolognese is a dish that brings people back helped seal the deal. However, the densely meaty sauce struck Angelique as somewhat under-seasoned. And although it was presented very attractively in a ring around a nest of noodles in the center, the proportion of pasta to sauce ended up being unbalanced; when all the noodles had been eaten, plenty of unaccompanied Bolognese remained.

Jason ordered the daily local meat special, a rib-eye steak, and found it on the chewy side, perhaps from being cooked rare. But the flavor was good, and chili compound butter made for a well-suited topping. Celeriac chips weren't crisp enough, but the same root in creamy, mashed form was light and delicious. Best of all, its considerable sweetness was a perfect foil to slightly bitter rapini, while the aforementioned chili added another flavor dimension. This illustrates what might be the kitchen's singular strength: building up the interplay of disparate elements into a sort of dynamic balance that belied the idea of bland comfort food, all without distracting from the simple pleasure of the meal.

Lola's appetizers were exquisite, its entrees appealing, its atmosphere alluring and its service impeccable. When all was consumed and done, though we were full and the hour grew late, we wished to stay... to linger in the warmth and satisfaction of Lola.