In a way, the closest you can come to dining on the river's edge in Pittsburgh is in Beaver. Actually, it's in the aptly-named outskirt of Industry, where a historic lockhouse on the Ohio, Lockhouse 6, has been recycled into a stunning setting for outdoor dining -- as long as we can all agree that aging industrial infrastructure, aglow in the setting sunlight, is stunning. To get there, you drive down the Ohio River, way past the old airport, rolling back into a landscape of oil tanks and working smokestacks. It's a little like time travel, but with pizza and beer at the end.

We could barely find parking in the lot, surely a good sign. The floating dock on the river below was nearly full, too. Strains of an acoustic duo playing "Take It Easy" drifted out to meet us. Yes, friends, yacht rock: What better soundtrack to accompany a meal to which several of our fellow diners arrived by boat?

Lockhouse 6 owes its magnificent location to a utilitarian past. The lock and dam were built 100 years ago. After the dam came down in the 1930s, the building -- originally used to generate steam power to open and close the lock gates -- languished until an ambitious renovation in the late '90s gave it new purpose.

Indoors, a black-and-white color scheme plus fresh flowers, linens and candlelight contribute to a simple, almost starkly elegant ambience. Large windows frame views of the zinc plant across the river, and outside, a duplex of decks provides ample riverside seating. On the upper level, an old boat has been cleverly recycled into a bar, while on the lower, you are so close to the water that fish actually cavort at your feet.

To span the historic interior and the laid-back exterior, Lockhouse 6 features two kitchens, each with its own menu. The "indoor" menu is, fittingly, a more formal assortment of appetizers and entrees, while the "outdoor" menu consists mainly of pub grub such as pizza, wings and hot dogs. But in reality, both menus are available in both seating areas, so we were able to sit out on the deck and satisfy our desires for both soft pretzels and pork saltimbocca. Imperfect coordination between the kitchens meant that our pretzel arrived just in time for dessert, but on such a pleasant evening, and with otherwise friendly and attentive service, we couldn't get too worked up about it.

The first dish to arrive was lamb lollipops, which is the adorable new name by which little lamb chops are going these days. Now, we think that lamb is inherently delicious, and it would take a really bad preparation to change that. Lockhouse's chops, served with roasted red pepper and feta cheese, were no such thing, but neither was the lamb much enhanced with, say, seasonings. Salt and pepper, yes -- but any number of Mediterranean-derived spice combinations would have knocked this dish out of the park.

We were curious about Lockhouse's "frips" -- fried, crinkle-cut homemade potato chips -- so we ordered them with Cajun spices (other options are ranch and BBQ). While the chips did not distinguish themselves noticeably from their better store-bought brethren, the fresh tossing with Cajun spices was heartier than if from a bag.

The waterside setting gave Angelique an appetite for seafood -- albeit from more distant waters than the industrial waterway before her eyes. Her Atlantic salmon, brushed with pesto and baked under a summer-weight blanket of Asiago cheese and tomatoes, gave her no regrets. Cheese and fish can be a tricky combination, but this one worked, with the herbal pesto acting as bridge between the oily (in a good, omega-3-fatty-acid way) fish and a judicious amount of the creamy, nutty cheese.

Lockhouse's saltimbocca had little in common with the Italian classic cooked with prosciutto, fontina and sage. However, ultra-tender slices of pork tenderloin -- joined with sun-dried tomatoes, more Asiago and a white wine-lemon sauce -- made for a savory, satisfying dish. The side of wild rice was also excellent, tender and light with an almost toasted flavor.

Jason asked for his New York strip steak medium-rare and, in a sense, he got it: close to medium at one end and rare at the other. Since the steak wasn't noticeably uneven in thickness, we can only assume that it was victimized by an uneven grill. For all that, it was a good-quality piece of meat, tender and beefy at both ends. A peppercorn bordelaise was just enough to add flavor without making us ask, "Where's the beef?", although Jason was a bit surprised by the absence of coarse pepper in it. Once again, the side was worth mentioning in its own right: a simple linguine with marinara, the sauce bright and well seasoned, with the bit of melted cheese on top a nice touch.

Like Jason's steak, our meal at Lockhouse 6 was good, if uneven. But with prices below premium for a setting without peer, we found it easy to make some concessions to perfection. 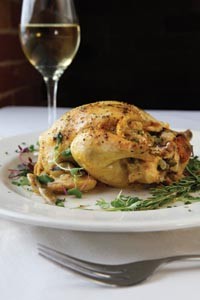