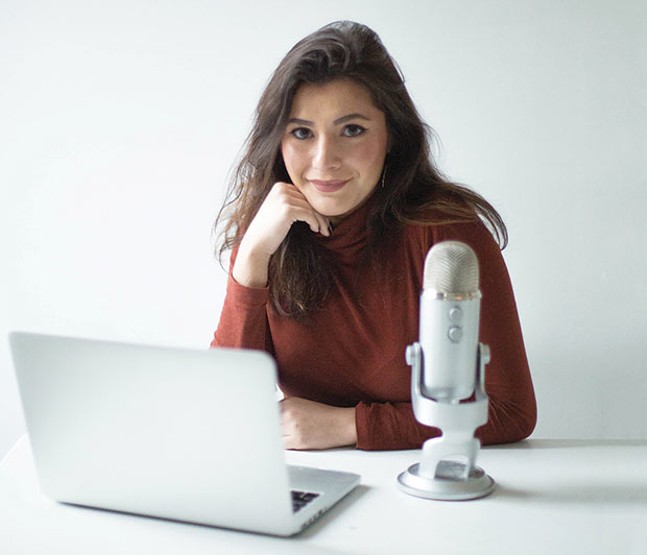 For many people, the phenomenon of ASMR (Autonomous Sensory Meridian Response) puts a name to a feeling they’ve always known but couldn’t place. Now, an entire community on YouTube thrives on this feeling, lulling viewers into a state of relaxation and sleepiness.

Local YouTuber Lily (who goes by only her first name) started making ASMR videos nearly five years ago on her iPhone. Her channel, Lily Whispers ASMR, now boasts more than 180,000 subscribers. Like many viewers, she knew the sensation as a kid long before she had a name for it.

“I remember the first time I felt ASMR in real life was when my friend was coloring with crayons,” she says. “I was like, ‘Wow this is so nice’ and I never wanted her to stop.”

Much like that feeling was, the definition of ASMR can be elusive. It’s a bodily sensation brought on by sounds, or “triggers” like whispering, brushing, or plastic crinkling that induces calm. ASMRtists make videos ranging anywhere from 10 minutes to two hours. They can be as simple as nails tapping on a counter or as complex as a fully costumed role play featuring a doctor whispering through a virtual physical. The sensation is often described as “tingles” that start at the back of the head and move down the spine. Lily prefers to call it a shiver.

Lily first discovered ASMR on YouTube as an anxious college freshman and began making her own videos soon after. While she had the support of family and friends, it became an issue when classmates found out and would tease and bully her.

“I was at that point in my life where I was still coming into myself and wasn’t really confident because it was still kind of new and unusual. And so when people would come and whisper to me at parties, it was like the end of the world,” she says.

Pinned to the front page of her YouTube channel is a video titled “My ASMR Story and How It Changed My Life,” in which she details the scrutiny she underwent from leaders of her sorority, who called her in for a high-level meeting and accused her of making sexually inappropriate videos. “She talked to me like I was a webcam prostitute,” Lily explains in the video.

Due to the intense level of intimacy ASMR videos create, outsiders looking in often mistake it as being sexually driven. The lines are blurred, too, by certain role plays, like a masseuse giving a neck massage. While there are also subsections of the ASMR community that lean into erotica, ASMRtists and their viewers usually insist there is nothing sexual about the videos or the feelings they induce. “I don’t create my content to stimulate someone sexually, so if they perceive it as such, it’s their problem,” Lily says. In a study conducted by researchers at Swansea University in the United Kingdom, only 5 percent of ASMR viewers were looking for sexual stimulation.

Lily’s most popular video, “Big Sis Does Your Makeup Roleplay” (1.1 million views), features her saying “I’m so proud of you,” before gently miming the application of a full face of makeup onto the camera. “I have a lot of, like, young girl viewers who don’t have an older girl role model, and so they like advice videos and makeup videos,” she says. Similar videos on her channel include "ASMR Supportive Friend Pep Talk and Pampering" and "ASMR Helping You With Your Eating Disorder."

The ASMR community invented itself on YouTube and gave niche careers to content creators who might not have been able to do so on other platforms. Lily began making money from her videos a few months in, but the channel is still a side gig to her 9-to-5 job in digital marketing. YouTube has recently set stricter rules on which videos can be monetized, creating new requirements for its partner program, as well as tightening ad appearances after a major advertiser boycott last year over video-content concerns. “I’m not religious, but I thank God every day I didn’t decide to pursue [my channel] as a career, because the ups and downs that YouTube has is just not stable,” Lily says.

Part of those ups and downs is the lack of protection from harassers. “There’s very little protection [for] content creators, because an internet threat is nothing. It’s not really taken seriously, because it’s like, ‘They’re not here. They can’t really do anything.’ But I don’t see it that way,” Lily says.

The harassment and cyberbullying section of YouTube’s help center includes tips like “Tell friends to stop cyberbullying” and “Tell an adult if you remain concerned.” She considers herself lucky to have only once filed a police report.

On the frequency with which she blocks creepy or inappropriate commenters, Lily notes, “I’ll do anything for peace of mind.” And as the community continues to grow and change, with or without the support of its current platform, Lily and her fellow ASMRtists will continue to bring peace of mind to millions of viewers, hooked on a whisper.