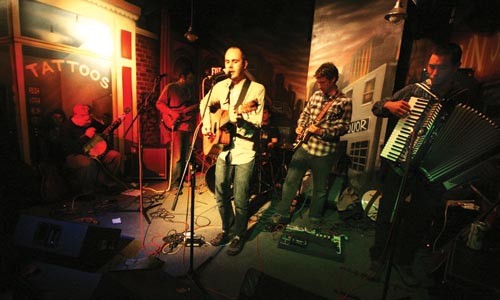 Toward the end of my interview with Nik Westman, he casually puts forth a question of his own: "What do you think the genre is?" he asks, referring to the self-titled debut CD by his band Nik & the Central Plains. "Would you call it working-class indie? Indie folk-rock?"

Westman's query doesn't imply that the guitarist and singer doesn't have a handle on the sound of his music. The truth is, Nik and the Central Plains' 13-song CD doesn't fit some easily defined category, or hybrid category, of music. Elements of country, folk and indie rock weave in and out, resulting in a blend of songs that sounds impressively familiar but, in the final analysis, original.

A native Swede who lived in Los Angeles during high school, Westman moved to Pittsburgh in 2002, when his parents began teaching at the Art Institute of Pittsburgh. Guitar in hand, he began frequenting open stages and meeting musicians supportive of his songs, leading eventually to the current Central Plains lineup: Kraig Decker (bass), Colin Bronnenkant (drums) and Tom Demagall (guitar).

Although the band's name might suggest roots rock, its origins were quite different. A graduate of the Art Institute's culinary school, Westman once wrote a book investigating the cuisine of Pennsylvania's Central Plains, which he also dubbed Nik and the Central Plains. "I thought it had a ring and I kept it, figuring I'd use it for this music stuff," he says.

Westman's singing voice exudes calm in most songs, similar to Dean Wareham, the former frontman of Luna and Galaxie 500. At other times, he recalls Stephen Malkmus during his indie-slacker days in Pavement -- especially in "Burlee," where Westman ends each line by sliding up to a falsetto note, either as a joke or as a twist on an already interesting melody.

Ironically, neither of those musicians inspired Westman's writing. "I really grew up listening to Indian music," Westman says. "My parents listened to that and Bob Marley." Modest Mouse and the Shins became favorites later on, he says, and he admits falling hard for The Kinks. The latter influence can be detected in his lyrical scene-setting, even in a song like "Red Eye Vultures," which seems to shift around in an almost dreamlike sequence of events.

"Sometimes I'll walk around and watch people in scenarios and try to get a feeling or a certain emotion into a sentence," Westman says.

The songs on the band's CD come from seven different recording sessions, ranging from local Treelady and Machine Age studios to home recordings and one done in California. One features a guitar solo by Westman's dad. "I sort of impulsively recorded songs as soon as they were done, just to get them recorded," Westman says. "I went through a library of songs that I recorded and picked these 13. The CD is basically a collection of songs. It's not a concept album."

Many songs are built around Westman and his acoustic guitar. When combined with Demagall's twangy picking, a track like "Into the Unknown" develops a country lilt. "Solitary Bird" takes this even further, with just Westman and Rufi Barnes on cello, glockenspiel and foot-stomps. At other points on the disc, "King of the Bridge" and "Arctic Dance" show off some tense indie-rock moments, especially during the latter, when Westman unleashes a few wild shrieks.

Even if he's not sure how to pigeonhole his music, Nik Westman feels justifiably confident about the finished album. "I don't think it's just for friends. It feels really good," he says. "I don't feel like I have to explain it to people. I can say, 'Here's the CD. Listen to it.'"