"After hearing the song, Git was like, ‘I want to do a whole project.'"

Download the Piece of Mind EP on iTunes or at gitbeats.bandcamp.com. 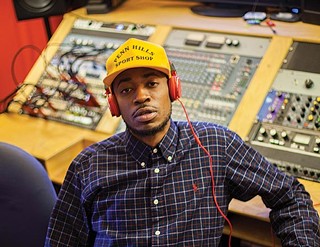 Since 2010, Jamar Hubbs, a Penn Hills native and University of Pittsburgh graduate, has been on a hip-hop journey. Taking the stage name Hubbs, he began perfecting his craft by featuring on the mixtapes of other local rappers.

In 2011, he got his first real shot on DJ Drastik's Sole II Soul Mixtape Back To Reality, which featured talented MCs like B. White, Beedie, Shad Black, Franchise, and Jon Quest. He featured on a track with Beedie called "Happy." That song caught the ear of noted New York-based producer Git Beats, who has worked with Wu-Tang, RZA, Digable Planets and many others.

"After hearing the song, Git was like, ‘I want to do a whole project [together],'" Hubbs recalls.

A meeting quickly spawned a kinship. "We developed a chemistry working together," says Hubbs, whose creative strengths lie in his lyrics and the use of '90s-style rhyme patterns. The flow between the artist and producer must be organic, and the sound Hubbs and Git Beats created together holds true to this sentiment.

In 2014, the duo dropped the collaborative EP Piece of Mind, which attracted online attention. "I knew the blogs would get the project," Hubbs says. "What surprised me was the amount of blogs and overseas websites [that] picked it up." One day, Hubbs received a Twitter notification from someone who heard his song on Sirius XM radio. "Someone tweets me, ‘I'm riding to Pittsburgh and Sirius XM is playing @itsHubbs track,'" he remembers. "That caught me off guard." It turns out that the track was played by WNYU's DJ Eclipse, who later invited Hubbs to do an interview the next time he was in New York.

Hubbs details that meeting: "My blood pressure was so high, Eclipse was spinning and Kool Keith was on my left," he says. "It was humbling and surreal, to be honest."

Hubbs and Git are working on their follow-up project "Magic Birds," which will be released later this spring. "Pittsburgh artists need to be more global-minded," he says, of what he's learned on his journey. "It's a whole world out there."