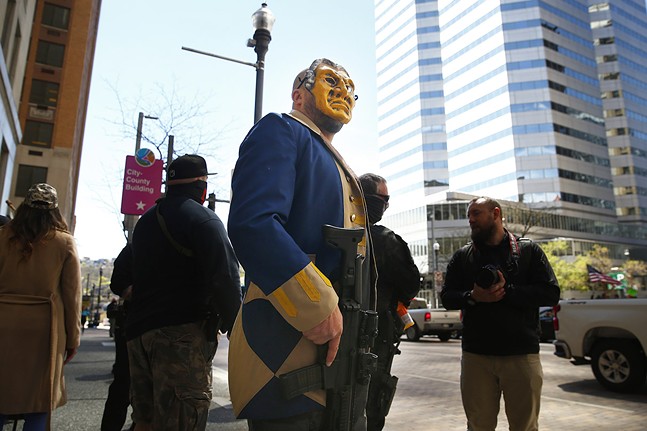 Posts circulated today alleging that Paul Martinez and his wife, Leah, who co-own the Strip District clubs CAVO and Cake, attended the protest armed with what appeared to be semi-automatic weapons. The posts were accompanied by various media photos taken at the protest.

As reported by Pittsburgh City Paper, the protest, which took place outside of the Downtown City-County Building, drew around 120 people demanding that the state government reopen businesses and halt the coronavirus closures.

In a since-deleted public post on his Facebook page, Paul Martinez seemed to confirm that two of the protesters, one wearing a George Washington mask and period coat, the other wearing a scarf over their face, were him and Leah. Screenshot
Now-deleted Facebook post from CAVO and Cake owner Paul Martinez
He followed up with a post submitted earlier today that reads, “Everyone is trying to bash us for attending this protest. Saying we have 'guilt by association' to others that were there. Well maybe the crowd would have looked different if anyone else actually showed up to fight for their cause like I tried to get a week ago. But hey, if it makes you feel good about yourself to send us vile messages than go for it.”

The couple has come under fire for a variety of reasons, with a number of local social media users expressing disgust over their appearance at a protest that they feel promotes irresponsible, possibly dangerous actions that would lead to more COVID-19 related deaths.

Sarah huny young, a local DJ and founder of the Darkness Is Spreading event collective, posted a video of the protest on her Twitter account that pointed out Paul and Leah as owners of CAVO.

"The recklessness pisses me off, not the dissent," says young. "We all want answers and an actual plan. Yes, small businesses deserve the bailouts. We all want this quarantine to end as soon as possible; I'm a part of the nightlife industry, too. But it's literally dangerous to gather a crowd of people together while an extremely contagious virus is killing thousands of people per day. And it's alarming to bring assault weapons and disguises with you. This will only draw out this situation even longer for all of us, and it's fucking asinine. People should be informed on who is behind it."

Besides young, others felt that their choice to carry guns was an intimidation tactic that had nothing to do with the protest's supposed mission of speaking for small business owners and currently unemployed workers who are struggling due to the shutdown and the government's lack of support.

CP and other news outlets also captured Paul and Leah standing with a group of armed protesters, many of whom sported patches identifying them as part of the Iron City Citizens Response Unit militia group. Those patches, as well as others worn by some members of the group, included a Norse symbol believed to be associated with white supremacist groups, though, as a previous story points out, “nonracist pagans may also use this symbol.”

"My wife and I attended a protest yesterday.
As you can see from the screenshots (see below) from the last week, I have been trying to get people from all sides to come together and stand against our government.
This wasn’t about us. We own a large capacity venue, we already know we aren’t opening any time soon due to social distancing and safety.
What it’s about is our government forcefully shutting down small businesses while letting huge corporations like Walmart, Home Depot/ Lowe’s and others operate while not allowing the same type of business owned by the little guy.
The government said they would help small businesses and their employees, but so many small places are closing their doors for good because the help never came.
We aren’t saying the virus isn’t real or that we don’t care about others. Everyone does.
And we certainly aren’t 'white supremacists'
That is just silly.
And yes to answer your question, we have been doing LGBTQ events for almost 12 years. We support LGBTQ community and will continue to do so.” 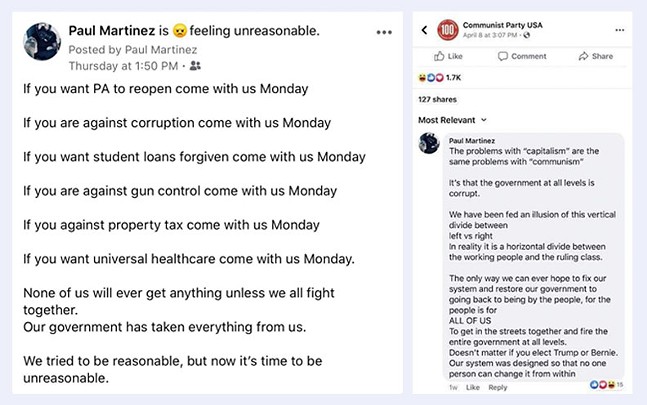 Screenshots provided by Paul Martinez
When asked why he and Leah carried guns at the protest, Paul declined to comment.

One of the most vocal groups against the Martinez couple's presence at the protest were members of the Pittsburgh LGBTQ and drag communities. This is due to Cake being promoted as an LGBTQ-friendly club that has hosted a variety of drag performers and other events since it opened in 2018.

One Facebook user, Stephen Tkacik, who performs as the drag queen Lucille Lovegood, posted a photo of Paul's original Facebook post, writing, “The owners of Cavo/Cake feel the need to brandish their guns because they don’t understand how viruses work.”

Tkacik expressed concern over the use of weapons, adding, “I’ve heard from friends on my timeline that [Paul and Leah] are [Trump] supporters. After Trump's calls to 'liberate' states, I can only imagine what their intentions are when carrying around weapons.”

He went on to say that he felt “disheartened and disgusted” by their actions, adding, “To know people are profiting off of our community while supporting a man and a party that has tried so hard to silence us and call us freaks ... the fact that the owners were there at an event that featured iconography used by white nationalists is pretty damning evidence on their character.”

As for what he hopes to see happen as a result of this protest, he believes patrons and performers should move on.

“Sink or float, the owners will likely continue with how they think. They’ve made up their minds,” he says. “As for the community, I would hope to see us all rally around common sense and the fact that we have a responsibility to those in our city that are most susceptible to the virus. I especially don’t want to see drag shows with nationally known queens stop happening in Pittsburgh. They bring lots to our city, and I think they should continue at a different venue.”CP editor Lisa Cunningham contributed to this report.

Where to find Easter Sunday meals and sweets in Pittsburgh